Buy stock in Orville Redenbacher today, because the popcorn market is set to explode. Reality TV goofball, and GOP object of perverted lust, Donald Trump, has declared that he will be kissing off his former BFF Fox News. In a tweet explaining the break up Trump said that…

“@FoxNews has been treating me very unfairly & I have therefore decided that I won’t be doing any more Fox shows for the foreseeable future.”

Oh my. How ever will we survive? This isn’t the first time that Trump and Fox have quarreled. Earlier this year they took slaps at one another for what Trump thought were questions that were too hard during the Fox News Republican debate. He shot off insults aimed at the only female moderator, Megyn Kelly, that focused on her menstrual cycle as his reason for her harsh questions.

Eventually Trump and Fox News CEO Roger Ailes patched things up with Trump praising the executive and the network’s fairness. But that quickly deteriorated as he openly taunted Ailes saying “I love Roger, but all you have to do is ask him who won.” That’s akin to saying Ailes is my bitch.

The latest dust up appears to have been triggered by Trump’s butthurt over critical remarks on Bill O’Reilly’s show. Then, in a tantrum that seemed to have come out of the blue, Trump served his divorce papers on Twitter (Twivorce?), alleging abuse and irreconcilable differences. It all began in typical Trump fashion as he tweeted his disapproval complete with ad hominem insults. 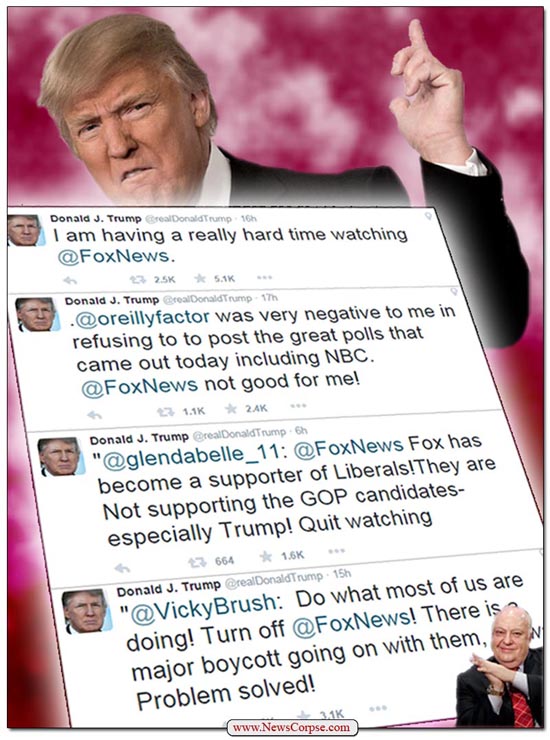 Ironically, there is no network that has been more friendly to Trump and his campaign. They have featured him far more, and more positively, than any other candidate. In fact, his ubiquitous presence on Fox exceeded the combined total air time for ten other Republican candidates last month. Fox News made Trump and he owes his current front-runner status to their worshipful coverage. For some examples of just how reverential Fox News has been, watch this:

Following Trump’s dismissal of Fox News, the network made a statement that may explain why Trump suddenly cut his ties. According to a spokesperson at Fox it was the network that fired Trump first. They said that in response to his tweets, they canceled his scheduled appearance on O’Reilly for Thursday. Subsequently, Trump decided to hit the press first with news of the separation. The Fox spokesperson went on to say that…

“When coverage doesn’t go his way, he engages in personal attacks on our anchors and hosts, which has grown stale and tiresome. He doesn’t seem to grasp that candidates telling journalists what to ask is not how the media works in this country.”

What’s funny about this is that Trump may have managed to accomplish something that News Corpse, and millions of rational, thinking Americans, have been trying to do for years: Mount an effective boycott of Fox News. The response on Trump’s Twitter page is filled with his followers pledging to forever abandon Fox and its “liberally-slanted” news coverage. That could actually have some real advantages for the future of media and America. Even though Trumpsters are among the most delusional of the GOP fringe, there are studies that show that Republicans who watch Fox are even more ill-informed than Republicans who don’t.

So the more people on the right who avoid Fox News, the better. And I may be in the uncomfortable position of having to thank Trump for getting people to stop watching Fox. All told, it would be worth it. And now I have to go restock my supply of popcorn. This show is still only in the first act.

[Update:] Crybaby Trump, who routinely calls people ugly and stupid, is now saying that he was offended by someone who does not work for Fox (National Review editor Rich Lowry) saying that Carly Fiorina “cut his balls off” in the CNN debate. So while he relentlessly postures about being a champion in the fight against political correctness, he can’t handle someone using a common idiom to describe what took place. How can this thin-skinned, whiner go up against Iran, who literally call for “death to America,” if he can’t deal with harmless, non-lethal metaphors?

[Update II:] Here we go again. Fox News says they have scheduled a meeting (again) with Trump to settle their differences over his latest tantrum. Planned for next week, this would represent their third “truce” so far. The real question is why is an alleged “news” network negotiating the conditions for coverage of a political candidate at all? That is a flagrantly inappropriate breach of journalistic ethics. If Trump doesn’t like Fox’s treatment he can stay off their air or go on and complain. Secret meetings raise the question of what concessions Fox News will make to accommodate (benefit) Trump at the expense of his rivals. And when was the last time that Fox offered to meet with President Obama or Hillary Clinton to discuss their differences with Fox’s far more blatant unfair coverage? No reputable news organization would even consider altering their coverage to satisfy the demands of a petulant candidate. But then again, we are not dealing with a reputable news organization.