The myth of the “liberal” media has been thoroughly debunked by volumes of evidence, and yet many people continue to believe that news operations owned and operated by giant multinational corporations still harbor a liberal bias for some unexplained, and unexplainable, reason.

The latest proof that Big Media slants their coverage away from true progressive issues comes from last Sunday’s broadcast of 60 Minutes on CBS. The twenty-four minute interview of President Obama was sufficient time to cover a variety of subjects that have a real impact on the lives of real Americans. However, one subject was left on the cutting room floor: The crisis of gun violence (video below). 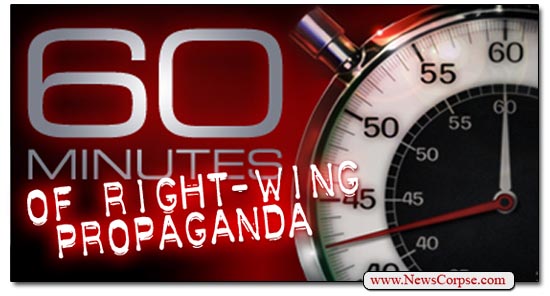 The fact that CBS found time in an interview of Obama for an extended discussion of Hillary Clinton’s email server, but was unable include a brief segment of the gun dialog, says something about the editorial decision making at the network. If you wanted to know what Obama thought about how guns affect our society, and what can be done about it, you would have had to search for it online. What you would have found was a three minute segment that could easily have been slipped into the CBS broadcast. And it’s fair to say that this issue holds more value for the American people than adding to the tabloid sensationalism that Fox News has been feverishly stirring up about emails that have uncovered no wrongdoing whatsoever.

This sort of bias is not new to CBS or 60 Minutes. In 2013 they ran a story about Benghazi that was so full of holes that they had to retract it and apologize for airing such an embarrassing and obvious hoax. At that time News Corpse published an explanation for how CBS could have been taken in by such a conspicuous fraud. That explanation revolves around the personalities in the network’s executive suites who are still running the newsroom. This is what I wrote in November of 2013:

In short, Rhodes was one of the principal architects of the Fox News slant toward far-right extremism and brazen conservative partisanship. CBS News must have known what they were getting when they hired him.

So is it any wonder that CBS would focus so sharply on dramatic, but insubstantial controversies? They clearly have an editorial mission to push a conservative agenda and suppress any progressive initiatives for reform. The same sort of problems exist at other networks and news outlets. The current executive vice president of CNN, Ken Jautz, is the man who gave Glenn Beck his first job on television. Even MSNBC is heading toward the right as they remove progressive hosts and plan to expand Morning Joe another hour. Which is why I say “Liberal media my ass.”