If you are looking for further evidence that Donald Trump is a repugnant misogynist who has a deeply rooted disrespect for women, his response to yesterday’s exchange with a woman at the bipartisan No Labels conference should suffice nicely. 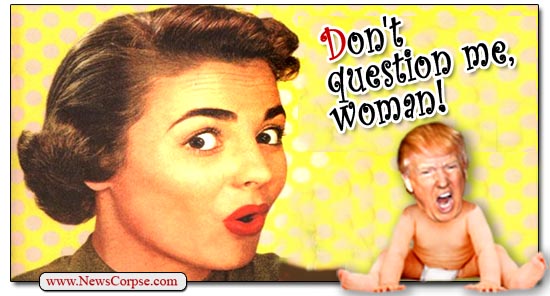 After a poorly received presentation, due to Trump’s masturbatory approach to politics, The Donald took a few questions from the audience. Of particular note was Lauren Batchelder, a young woman who prefaced her question by stating that “I don’t think you’re a friend to women.” Trump immediately interrupted her to swear that he “cherishes” women and would “take care of them” because his mother was “maybe the greatest [woman] ever.” That may not be what most women are looking for in the struggle for equality. Being cherished is not the same as being respected; being taken care of is condescending; and his absurd exaltation of his mother is an Oedipal irrelevancy that has anything to with women’s rights.

Batchelder continued to inquire as to whether in a Trump administration “will a woman make the same as a man, and do I get to choose what I do with my body?” Trump answered that women will “make the same if you do as good of a job,” which is inherently sexist because it implies that women’s skills are unproven so they have to be judged by the standard, which is men. Then Trump tacked on that he is pro-life, effectively telling Batchelder, “No, you don’t get to choose what you do with your body.” But it gets worse. Today Trump recalled the exchange in a tweet saying…

“The arrogant young woman who questioned me in such a nasty fashion at No Labels yesterday was a Jeb staffer!”

So now if you have the audacity to confront Trump with a valid question that addresses significant women’s issues, he feels it is appropriate to dismiss you as “arrogant” and “nasty.” It’s reminiscent of the insults that Trump leveled at Fox’s Megyn Kelly after she asked him to explain his derogatory remarks about women.

Trump also brazenly lied in saying that Batchelder is a staffer for Jeb Bush. The readily available truth is that she is an unpaid volunteer who attended the No Labels conference on her own. The Bush campaign confirmed that they had no role or knowledge of her attendance or her question. In fact, the substance of her question doesn’t suggest any alignment with Bush because he has the same positions on those issues as Trump. Why would the Bush campaign plant a question that he would have trouble answering himself?

More to the point, Trump’s demeaning and offensive response affirms his hostility toward women. This is especially evident when you compare it to the response he gave to a male questioner a few weeks ago who said that “We’ve got a problem in this country. It’s called Muslims,” and that President Obama is “not even an American.” To that guy Trump said “We’re gonna be looking at that.” Trump apparently didn’t think that racist question was either arrogant or nasty. Although, some of his wingnut supporters also thought that questioner was a plant, but they were hilariously wrong.

Luckily for Trump, his followers are as repulsively misogynistic as he is, so he shouldn’t suffer any negative repercussions due this noxious behavior. He’ll go forward with the same quarter of the Republican base that he has corralled from the start of his fantasy campaign. And when the GOP field narrows, that minority bloc will leave him at the back of the pack. But his ideas, which are consistent with the Republican mainstream, will follow whoever the eventual GOP nominee is like the stink of skunk.