Earlier this week Bloomingdale’s came under an onslaught of well-deserved criticism for an ad that seemed to advocate sexual assault by surreptitiously drugging your female friends. It is inconceivable that this ad went through their marketing department processes and emerged as acceptable to publish. Eventually Bloomingdale’s acknowledge their abysmally poor judgment and apologized. 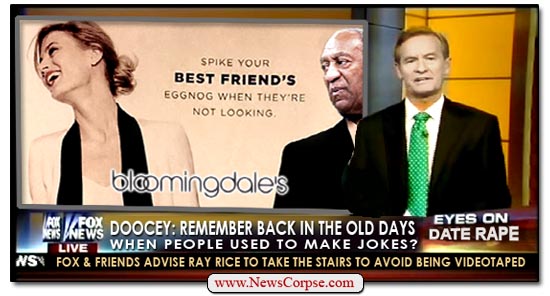 That, however, is not the end of the story. Because Fox News still had something to say on the subject. And it was left to the kids on the curvy couch of Fox & Friends to articulate the network’s response (video below). Thereupon, co-host Elisabeth Hasselbeck, the lone woman on the program, called it a reckless ad. Unfortunately her fellow-co-hosts were somewhat less disturbed. Clayton Morris jumped in to praise Bloomingdale’s for apologizing like a remorseful wife-beater. And Steve Doocy actually tried to make excuses for the ad saying “Remember back in the old days when people used to make jokes?” Morris then joined in to add “When people had a sense of humor.” Yeah, you remember humor? Those uniquely human moments when we are amused by violence against women. [Ironically, I just published an article about how Fox News aspires to be a comedy network]

Indeed, those were the good old days. Men could spike the drinks of women and have their way with them without repercussions. And alluding fondly to those carefree times (for men) is nothing more than a bit of good humor. Bill Cosby must be thinking back on those days with some longing. It’s reminiscent of the time when the Fox & Friends gang happily joked about NFL running back Ray Rice knocking out his fiance in an elevator. Co-host Brian Kilmeade helpfully observed that “I think the message is – take the stairs,” presumably to avoid being videotaped in the commission of an assault.

Fox News has a history of downplaying the seriousness of sexual assault. On one particularly repulsive occasion, commentator Liz Trotta complained about women in the military who whined about being assaulted by their comrades. Trotta argued against “this whole bureaucracy upon bureaucracy being built up with all kinds of levels of people to support women in the military who are now being raped too much.” Although she never actually defined how much rape was acceptable before it would be considered “too much.”

The takeaway from this is that whenever you hear Republicans talk about returning the country to a past that they imagine as serene and untroubled, what they really want is to roll back the clock on women’s rights and civil rights and any progress made on advancing individual freedom and reducing bigotry. They revere nothing more than a past when white, male, Christians dominated the nation’s social and governmental institutions. And that deranged expression of nostalgia just isn’t funny anymore.

2 thoughts on “Fox News On Bloomingdale’s: What Could Be Funnier Than Date Rape?”