In what can only be described as an episode of acute dementia, Sen. Ted Cruz made an allegation so bizarre that Donald Trump may sue him for infringing on his trademarked persona. Speaking to right-wing radio hack, Hugh Hewitt, Cruz embarked on a rant wherein he claimed that most violent criminals identify as Democrats.

Cruz: Here is the simple and undeniable fact – the overwhelming majority of violent criminals are Democrats. […] The Democrats know that convicted felons tend to vote Democrat. The media never reports on any of that. 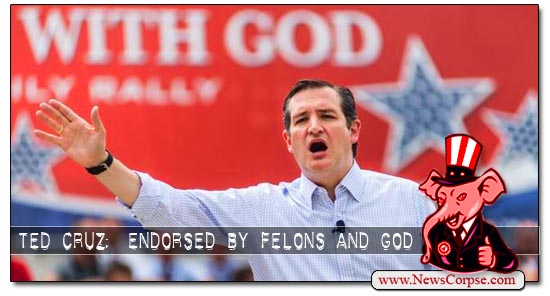 Cruz never explains how he ascertained the voting habits of America’s violent criminals. As “facts” go, his are neither simple nor undeniable. Rather, it is downright loony. Particularly the part where he asserts that by an “overwhelming majority” “convicted felons tend to vote Democrat.” How Cruz determined that is a mystery since most states have some sort of restriction on voting at all for persons convicted of a felony. What’s more, there are no studies that breakout the voting preferences of felons who are violent.

It is possible that more total felons lean Democratic simply because of the demographics of the prison population. More people who are poor or minorities are sent to prison after arrests and convictions. Often it is for non-violent crimes like marijuana possession or shoplifting. In those cases it is backwards to say that upon release these felons vote as Democrats. It is more correct to say that these Democratic leaning offenders are more often subject to prosecution and incarceration by a prejudiced justice system. If bankers, lawyers, stockbrokers, corporate executives, and offenders from wealthy families were arrested, convicted, and incarcerated at rates relative to their criminal activity, the situation would be very different.

What Cruz was attempting to do with these remarks was to exonerate violent conservative criminals like Robert Dear, the anti-abortion, Obama-hating wingnut who just murdered three people, and wounded nine others, at the Colorado Springs Planned Parenthood facility. Dear is another in a long line of right-wing Christianists who have engaged in violence to advance their radical agenda. And rather than address this weekend’s tragic events, Cruz sought to deflect with a ludicrous accusation against his political foes.

If Ted Cruz is really concerned about violent felons, he might want to stop associating with them. Shortly before the Planned Parenthood attack, Cruz was bragging about having received an endorsement from an activist who has called for the “execution” of abortion providers. Troy Newman, president of the far-right anti-abortion group Operation Rescue, has not only called for such executions, but has come to the defense of several radical Christianists who were convicted of bombings, shootings, and other violence against doctors and clinics. Operation Rescue was founded by Randall Terry, himself a convicted felon.

As it turns out, Donald Trump isn’t the only Republican candidate that is saying ridiculous and unsupportable things without consequence. The so-called “liberal” media is utterly useless when it comes to holding people accountable for spewing blatant lies. Ted Cruz should not be able to get away with his hostile rhetoric and his evasion from firmly condemning the domestic terrorism against women’s rights and the senseless violence that took the lives of a police officer, a veteran, and a young mother.