The annoyingly sanctimonious evangelicals that dominate the Republican Party are constantly reminding everyone else how serious they are about celebrating Christmas as the remembrance of the birth of their savior. If anyone should divert from the path of reverence even slightly, they lash out with accusations of blasphemy and sacrilege. It’s gotten so bad that Walmart greeters are forbidden to wish patrons a “happy holiday,” and Starbucks is required to print reindeer and wreaths on the coffee cups. So you have to wonder how these martinets of virtue will respond to the new Ted Cruz ad (video below). 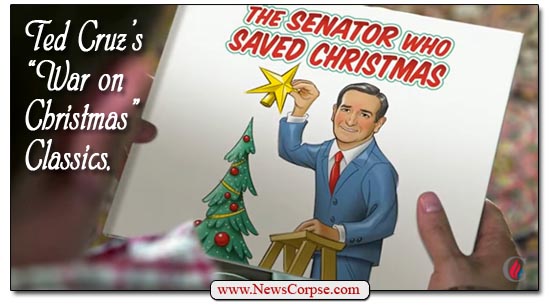 In the ad, scheduled to run during Saturday Night Live, Cruz makes an attempt at humor with a Christmas theme, but this insult to the solemnity of the season ought to make real Christians wince. At least that is what they would do if President Obama or Hillary Clinton ever tried to pull off something like this. Just the thought of Obama exploiting his children for a political ad that mocks the sacred holiday would send right-wingers into fits of holy rage. But that’s precisely what Cruz did.

The ad turns beloved traditional tales into parodies of political controversies. It is based on the sort of infomercials that peddle top 40 hits from the big band era. Some of the targets of Cruz’s comedy are “How ObamaCare Stole Christmas,” “Rudolph the Underemployed Reindeer,” and “The Grinch Who Lost Her Email.” It’s a veritable laugh riot. But by far the funniest part was that Cruz chose to remind people of his ridiculous reading of a Dr. Seuss classic during a senate filibuster. The ad opens with an announcer saying “Imagine the greatest Christmas stories told by the senator who once read ‘Green Eggs and Ham’ from the Senate floor.” Yeah, just imagine that.

There is an unsettling sense of absurdity seeing Cruz in what he obviously believes is a hilarious ad. After all, this is the candidate that just called for carpet bombing of cities in Syria where ISIS members might reside. Never mind that such a tactic would slaughter thousands of innocent civilians, including women, children, and even Christians. Cruz brags about his leadership in blocking any legislative reform to address gun safety after twenty kids were murdered at Sandy Hook. He later exploited the gun issue in another failed attempt at comedy by using an AR-15 to make what he called “Machine Gun Bacon.” And now he wants people to see his humorous side?

The ad closes with a line that he certainly regards as having a serious message. The announcer says “If you are not completely satisfied with this collection of Cruz Christmas classics, you probably hate Christmas – and America.” Anyone who has observed Cruz for any length of time knows that this is exactly what he really thinks about those who disagree with him. However, his fans will likely eat this up and consider it a heartwarming look at the jovial family man who boasts about his endorsements from preachers who advocate killing homosexuals. You know, peace on Earth and goodwill toward men. Just like Jesus said.