If you’re looking for signs that establishment players are getting nervous about the possibility that the privileged classes may soon have to share the wealth and be held accountable for their crimes, then watch for them to develop a paranoia about the fall of Western civilization and blame it people who advocate for fairness and equal opportunity. 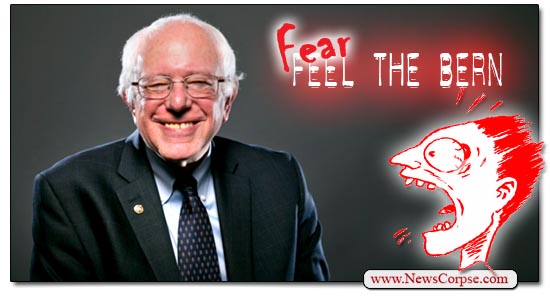 This week Stephen Schwarzman, the CEO of Blackstone Group, a global private equity and financial advisory firm, was interviewed in Davos at the annual World Economic Forum. When the subject came of the recently volatile stock market, Schwarzman offered his opinion that it was caused by three factors. The first was his assessment that the U.S. economy is slowing a little and concerns about China, which he said were overdone. The second were destabilizing world events including international hostilities and terrorism. And then there was . . .

“The third reason that we have unsettled markets is the fact that Bernie Sanders has become a viable candidate, at least in Iowa and New Hampshire. And the reason why that’s troubling is that he’s really on the far left, and we have a Republicans, on the other hand, who don’t inspire enormous confidence in terms of their ability, perhaps, to handle that job. So all of a sudden – and it really keys on this market collapse with Bernie rising as a viable candidate – that the rest of the world looks at America not the way America looks at America. For us it’s a local election. For the rest of the world it’s a global election. They depend on America to do the right thing.”

So it’s Sen. Sanders who is exerting his omnipotent control over the world economy? This feat of dominance is occurring even though not a single vote has been cast in the Democratic primary. That is a truly impressive demonstration of power. Who knew that an obscure senator from Vermont could wield such commanding control over the captains of industry and finance?

Apparently all it takes to roil the markets, according to Schwarzman, is a champion of average Americans becoming a “viable” candidate for president. Why that is perceived as such a destructive force wasn’t clearly explained. It seems to me that a world that depends on America doing the right thing would appreciate someone who wants to expand prosperity to as many people as possible. Although Schwarzman may have a point about Republicans that aren’t able to handle the job.

Sanders was asked about this revelation of his heretofore unknown dominion over the financial universe by Martha Radditz of ABC News. He literally laughed at the question and said…

“The reason that I am laughing is I fully admit to having a big ego, like many other politicians. But the idea that Bernie Sanders’s candidacy, because it has growing support all over this country, is unsettling world markets is absolutely absurd.”

Indeed it is. There are many reasons that the stock market has been antsy in the first weeks of this new year. What most credible economists cite is the dropping price of oil, a commodity whose value is determined by worldwide supply and demand. In that regard, what I have heard nobody mention, is what a great decision it was to decline to approve the KeystoneXL pipeline. The project’s advocates claimed that it would have substantially boosted the production of oil. That, we know now, would have exacerbated the current situation wherein there is a glut of oil that has caused the price to tank. So Keystone would have made things even worse.

What’s more, those who are panicking about what they regard as a stock market collapse are failing to put it into perspective. Even after the declines (of about 8%) in the past couple of weeks, the markets are still twice what they were when President Obama took office. That’s typically referred to as “correction” territory and not a crisis. Unless there is a Democratic president and Fox News is reporting on it, in which case it is a full-blown catastrophe.

The Wall Streeters may actually have something to worry about if Bernie Sanders is the next President of the United States. For that matter, they should worry about Hillary Clinton too. But their worries should have nothing to do with whether the world economy is going to crash. The truth is, as Clinton said recently, “The economy does better when we have a Democrat in the White House. That’s just a fact.” And therein lies the problem. Republicans are, by nature, averse to facts. They are far more likely to explain things by ascribing supernatural powers to their villains as well as their heroes. Maybe they should start a draft Voldemort campaign. Or maybe not. They already have Donald Trump.