There has been an aura of the absurd permeating this election season for many months. And it isn’t all connected to Donald Trump (although that’s a huuuuge part of it). The circus atmosphere of the Republican contest has exceeded all bounds of reason. They are calling each other liars, flip-floppers, and worst of all, Republicans. Who would have thought a year ago the the foulest insult that could be aimed at a Republican would be the accusation of being an “establishment” member of your own party? 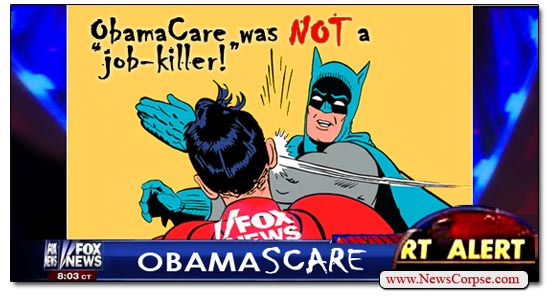 Amidst the turmoil and tantrums, Fox News, the staunchest evangelist of right-wing gospel, has itself come under pressure from within their own congregation. Most notably Donald Trump has pounded the network as unfair, unbalanced, and rife with dummies, losers, and bimbos. And he’s not the only wingnut taking swings at the conservatives favorite network. Everyone from Rush Limbaugh, to Glenn Beck to Ann Coulter has hurled broadsides at Fox. Well, those critics are not going to be happy about what happened the past couple days on the channel that had made destroying ObamaCare its prime directive.

Like most Republicans, Ted Cruz (R-TX) has feverishly attacked ObamaCare and promised its repeal if he were to be elected. This week he reiterated the demonstrably false GOP dogma that Obamacare was “the biggest job-killer in the country.” And when the subject came up on Bill O’Reilly’s show it did not receive the typical mindless thrashing that is the hallmark of Fox’s coverage.

O’Reilly noted that the Associated Press fact-checked Cruz and found that, not only was his statement false, the opposite was true. More jobs were created (over 13 million) simultaneous with an increase of nearly 17 million people getting health insurance who were not able to get it before ObamaCare. However, O’Reilly went on to cite dubious statistics that muted the beneficial aftermath of ObamaCare.

In response, his guest/victim, Kirsten Powers, disputed O’Reilly’s numbers, but also argued that even he were right “you have to make the connection that it was caused by Obamacare, and I don’t think that Cruz has made that connection.” Unfazed by facts, O’Reilly continued to muddy the debate by baselessly asserting that both sides have valid arguments. To which Powers replied with specific examples of conservative studies that affirm the positive impact of ObamaCare on employment. Characteristically, O’Reilly refused to budge, even while failing to offer a substantive rebuttal. He closed with a weak concession that Cruz ought to have sourced his data which, of course, O’Reilly himself didn’t do.

Today on Fox News Sunday the same issue was discussed. Ted Cruz was interviewed and given an opportunity to defend his own false allegations. He faced Fox’s Chris Wallace who surprisingly confronted him with the facts. Cruz typically dodged the question with a knee-jerk slam on the “liberal” media.

Wallace: The fact checkers say you’re wrong. Since that law went into effect, the unemployment rate fell from 9.9% to 5% as 13 million new jobs were created, and 16.3 million people who were previously uninsured now have coverage.
Cruz: Fact checkers are not fair and impartial. They are liberal editorial journalists. And they have made it their mission to defend Obamacare.

Of course. Everyone knows that fact-checkers have always been biased proponents of recklessly doling out healthcare to any slob that was dumb enough to get sick. Cruz’s notion that fact-checkers are not actually checking facts is a lunacy that is reminiscent of the Romney campaign in 2012 when his pollster declared that “We’re not going to let our campaign be dictated by fact checkers [who have] jumped the shark.” Republicans keep admitting that the truth is of no use to them. And in that spirit the answer Cruz gave ignored the facts entirely, offered no alternative data to confirm his view, and then veered wildly off topic. Then he became obstinate and angry when Wallace pressed him to address the subject at hand.

Veteran Fox-watcher Gabriel Sherman of New York Magazine has reported that personality issues and infighting have left Fox News grasping to shape an image during this campaign. But that is only part of the explanation for their spongy positions on matters that were once hard-coded. The viciousness exhibited by the Republican candidates toward one another presents an inherent conflict for a network that is so accustomed to agreeing with whatever the guy on the right said. Now they’re struck with the dilemma of who to suck up to if the choices are all right-wingers? And that predicament has left them confused and unprepared when a marginally progressive argument is dropped in their lap. They are simply so befuddled that they can’t keep their stories straight. Let’s hope this lasts until November.