At the opening of the Republican debate on ABC the candidates were introduced as they always are and they march out onto the stage to take their place behind their podiums. But last night that plan went haywire in manner that could not have been funnier if it was scripted by profession comedians (video below). 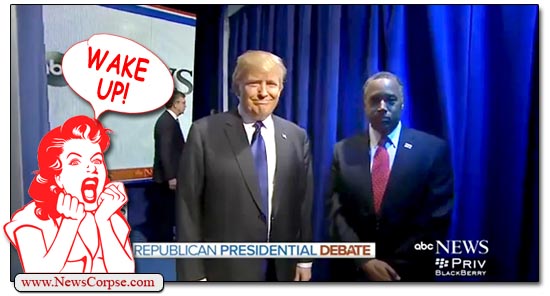 After introducing Chris Christie, the moderator introduced Ben Carson. For some reason Carson came out from behind the curtain and stopped in the wings looking confused, an expression that is not unfamiliar for him. Perhaps he just tuckered out before he could make it to his podium. The moderator continued with the introductions announcing Ted Cruz, who smiled as he walked past Carson, still befuddled. A stage hand was seen peeking out from the curtain trying to get Carson to take his position at his podium but was ignored.

Then it was Donald Trump’s turn. He meandered out from behind the curtain so slowly it looked like he was just wandering around with nowhere special to go (what debate?). Eventually he inexplicably decided to stand beside Carson in the wings. Maybe he thought Megyn Kelly was out there and he was too scared to proceed. Then again, Trump knows that Carson is a bad-ass who tried to stab one of his childhood friends and hit his mother in the head with a hammer, so maybe he thought Carson would protect him from Kelly. Jeb Bush came out next and breezed by the still loitering Carson and Trump, looking back at them curiously.

With almost everyone else on stage, the moderators finally coerced Carson and Trump to join their colleagues for the debate. Then they almost went on with debate without introducing John Kasich at all. You could hear somebody telling them not to forget Kasich. The moderators then attempted to cover for Carson and Trump’s strange behavior by saying that it was so loud in the auditorium that they didn’t hear. That might have been a decent excuse except for the fact that all the other candidates seemed to hear just fine.

After the debate got started Carson was asked his first question. Before answering he briefly addressed the screwed-up intro saying that the confusion stemmed from him not being introduced second as planned. The only problem with that excuse is that he actually was introduced second, as the video shows.

It’s hard to know whether to laugh at this buffoonery or to be afraid of how severely our democracy has deteriorated to result in these being the choices of one of our two major political parties. Well, actually it isn’t really that hard, you just can’t help but laugh. But afterward you can still be afraid. But what’s most frightening is what they all said during the actual debate. They acted like children tossing around insults, bashing Obama, and trying to out-macho each other with claims about how tough they would be on ISIS and who would do more waterboarding. They were totally incapable of offering any affirmative solutions to real problems. And that isn’t funny.

4 thoughts on “Not SNL: The Single Most Hilarious Moment In Any Debate Ever (Video)”