In the battle for political endorsements Donald Trump won the Teabagger gold by snagging Sarah Palin. But Ted Cruz, no slouch in the wingnut arena, managed to score a silver medal by winning the “conspiritual” (conspiracy+spiritual) heart of Glenn Beck. 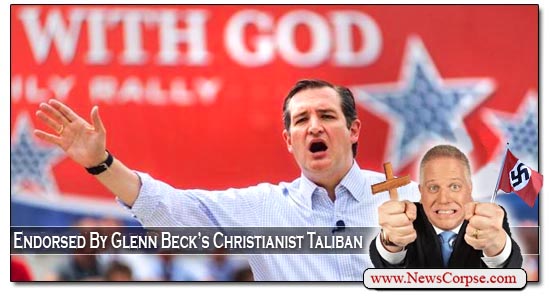 Fortunately for Cruz, Beck’s endorsement came with a truckload of goodies that only a practiced purveyor of snake oil could provide. Among those goodies are his relationships with the most fringy preachers America’s evangelical community has to offer. For example, Cruz has aligned himself with radical Christianist pastor Mike Bickle, a Beck pal, whose sermons have warned that God will “raise up the hunters” to go after any Jews who refuse to convert to Christianity. And Bickle was not afraid to name names. Adolf Hitler, according to Cruz’s new BFF, is “the most famous hunter in recent history.”

Bickle is not the only proponent of the crackpot theory that God sent Hitler to punish Jews. John Hagee of Cruz’s home state, Texas, has been preaching this nonsense for years. He is also a confederate of Glenn Beck. Hagee went to the extreme of literally thanking God for Hitler whom he believes was doing the Lord’s work by driving Jews out of unfriendly nations and into Israel, hastening the Apocalypse.

In his 2008 campaign for president, John McCain admirably rejected the endorsement of Hagee for saying the very same things that Bickle is saying. Cruz, on the other hand, has embraced Bickle and even attended a gala honoring Hagee where he vilified President Obama as “one of the most anti-Semitic presidents in the history of the United States of America.” At the time, the Anti-Defamation League and other major Jewish organizations called on Cruz to repudiate Hagee’s remarks, which Cruz obstinately refused to do.

None of this should surprise anyone familiar with Glenn Beck. He has a well established pattern of disparaging Jews and others he regards as different. He recently made a list of the nine people whom he said most contributed to the 20th century being the Era of the Big Lie. Eight of them were Jewish. Beck also maligned the majority of American Jews as being like terrorists, saying that “Reformed rabbis are generally political in nature. It’s almost like Islam – radicalized Islam – in a way to where radicalized Islam is less about religion than it is about politics.” And then there was the time that Beck likened 85 kids murdered in Norway by a right-wing extremist to the “Hitler Youth.”

This is pretty good evidence that Cruz is working hard to secure the Nazi vote. Of course, he’ll have to fight tooth and nail with Donald Trump for that sector of the electorate. Trump may already have an insurmountable lead by articulating an unequivocally fascist agenda. He even told George Stephanopoulos of ABC News that he is not bothered by comparisons to Hitler. Clearly Cruz has his work cut out for him. But Beck will surely be of some help rallying the Stormtroops. Consequently, the battle for the right’s Nazis and fascists and anti-Semites is going to roil the Republican Party for some time to come.