The Republican Party’s candidate for Bully-in-Chief, Donald Trump, is once again demonstrating how frightened he is by anyone unwilling to submit to his imagined authority. Trump’s well-known knee-jerkiness when confronted by criticism, or anything less than unequivocal compliance, generally results in a flurry of infantile insults and slander. 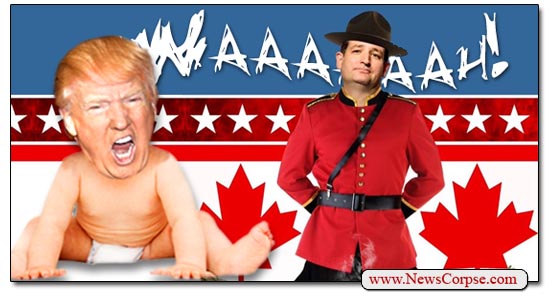 Today Trump’s tantrum was set off by a Twitter exchange between him and his former BFF, Ted Cruz. Trump accused Cruz of doing negatively slanted push polls about Trump and lying about his position on marriage equality (which Trump once supported and now opposes). When Cruz denied that he was involved in any push polling, Trump called him a liar and questioned his religious faith saying “How can Ted Cruz be an Evangelical Christian when he lies so much and is so dishonest?” Trump ought to be asked that question himself considering his record setting output of unambiguous falsehoods (see the Trump Bullshitopedia). Of course, if he were asked that question, he would just lie some more.

As the feud continued, Trump eventually brought in his big gun. For several weeks now, Trump has been making birther noises implying that Cruz is not eligible to serve as president because, having been born in Canada to a mother who is a U.S. citizen, he is not a “natural born citizen,” as is required by the Constitution. And now that his ire has been raised by Cruz’s hardball campaigning, Trump tweeted a full-throated threat aimed at bringing Cruz into submission:

“If @TedCruz doesn’t clean up his act, stop cheating, & doing negative ads, I have standing to sue him for not being a natural born citizen.”

For the record, Trump has already expressed an interest in suing Cruz over his citizenship. After first promising not to sue during a Republican debate on January 14, Trump contradicted himself three days later, telling ABC News’ George Stephanopoulos that it “sounds like a very good case. I’d do the public a big favor. It’s a good idea.” In fact, it’s such a good idea that some of his supporters have actually filed a lawsuit questioning Cruz’s right to run for president. In all likelihood that suit will be thrown out for lack of standing, but Trump himself, as a competitive candidate, wouldn’t have that problem.

The underlying question regarding the definition of “natural born citizen” has never been adjudicated by any legal authority. So whether or not Cruz is eligible is not settled law. Experts have come down on both sides of this question. But that has no bearing on Trump’s behavior.

What makes this latest threat so peculiar is that Trump does not seem the least bit interested in filing the suit in order to prevent an ineligible person from ascending to the presidency, or out of respect for the law, or to preserve the constitutional integrity of the office. Nope – Trump’s sole motivation is to beat Cruz into compliance. Trump’s threat explicitly states that, if Cruz were to capitulate to his demand to refrain from producing negative ads, then Trump would not proceed with the litigation and would allow the legally-suspect campaign to continue.

What’s more, Trump’s threat is itself potentially a violation of federal law. 18 U.S. Code § 610 – Coercion of political activity, states that…

By threatening Cruz’s political activities with regard to his campaign advertising, Trump appears to have stepped outside the boundaries of the law. As a United States senator, Cruz is an employee of the Federal Government and, thus, protected from threats by this statute.

Once again, Donald Trump is acting like the privileged, elitist, aspiring tyrant that he is. He doesn’t care about the law as it applies to anyone else or to himself. He is focused solely on how he can get whatever he wants regardless of how it impacts others. And he uses threats the way children use tantrums. If he doesn’t get his way he whines like a baby, throws around insults, and issues ultimatums. And he is presently the first choice of Republicans for the nomination of their party for president. Wow. Just wow.

Update 2/15/2016: Trump is again threatening to sue Cruz over his citizenship status. At a press conference today he said…

“One of the ways I can fight back is to bring a lawsuit against him relative to the fact that he was born in Canada and therefore cannot be President. If he doesn’t take down his false ads and retract his lies, I will do so immediately. Additionally, the RNC should intervene and if they don’t they are in default of their pledge to me.”

So now Trump is threatening both to sue Cruz and to ditch the Republican Party to run as an independent. Can this get any more fun?