The Washington Post (you know, that bastion of the so-called “liberal” media) just published an op-ed by Charles Koch of the infamous Koch brothers. The headline declared that “This is the one issue where Bernie Sanders is right.” While that’s a fairly generous admission, it is hardly representative of Koch’s actual worldview. 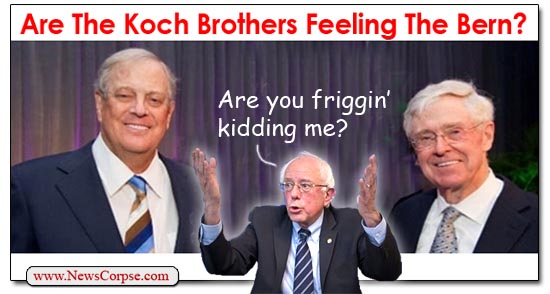 Koch begins his article by acknowledging the obvious – that he and Sanders “disagree on plenty when it comes to public policy.” Then he disingenuously asserts that he sees benefits in searching for common ground and greater civility.” That’s a bit difficult to believe coming from someone who has spent years bankrolling Teabaggers, the most uncivil movement of rightist malcontents in decades. Nevertheless, Koch sought to align himself with part of the Sanders platform of income inequality:

“The senator is upset with a political and economic system that is often rigged to help the privileged few at the expense of everyone else, particularly the least advantaged. He believes that we have a two-tiered society that increasingly dooms millions of our fellow citizens to lives of poverty and hopelessness. He thinks many corporations seek and benefit from corporate welfare while ordinary citizens are denied opportunities and a level playing field.”

While criticizing policies of both parties that “helps perpetuate a cycle of control,” Koch also took the opportunity to lash out at the regulations that have been a staple of his anti-government agenda. And he remains opposed to the sort of reforms that make it possible for people rise out of poverty (i.e. ObamaCare, unions, increasing the minimum wage, non-discrimination in employment, parental leave, etc.).

Despite the facade of a conciliatory partner in advancing the interests of all Americans, Charles Koch and his brother David are devoted to the fraternity of the one-percent to which they belong. They enjoy the fruits of income inequality. They are ardent foes of environmental protection and programs to mitigate climate change. Even worse, they would abolish the EPA, even while their businesses are among the worst toxic polluters in the nation. They favor privatizing Social Security and Medicare. They create media front groups to spread right-wing propaganda. And they are the biggest supporters and beneficiaries of Citizens United.

In addition to all of the above, the Koch brothers virtually created the Tea Party. Groups like FreedomWatch and Americans for Prosperity are nothing more than surrogates for the disgruntled goofballs who dress up in tri-corner hats and carry racist signs with pictures of President Obama as a witch doctor. The Koch brothers have invested multi-millions of dollars in the Tea Party in an attempt to crush Democrats and replace them with the sort of hard-line, right-wing extremists that have produced gridlock in Congress. They lust for shutdowns of government even if it means sinking the economy or denying healthcare for 9/11 first-responders.

This article is just another component of their campaign to rehabilitate their public image, cleverly referred to as “The New Koch” by Jane Mayer of the New Yorker. But, they are just as committed to their wingnut agenda as ever. They announced that they will spend nearly a billion dollars in the 2016 election cycle in support of conservative Republicans who promise to dismantle the government, leaving them free to pollute the planet and plunder the economy. So don’t let this faux Valantine to Bernie Sanders fool you. The Koch brothers are what they have always been: John Birch Society Libertarians with strong Ayn Rand leanings.