Proving once again how thin-skinned and paranoid Donald Trump is, he flipped out after learning that a new NBC/Wall Street Journal poll showed him trailing Ted Cruz nationally by two points. His bloated ego wouldn’t allow him to accept the possibility that his horrendous behavior at the last Republican debate might have caused his numbers to slip. 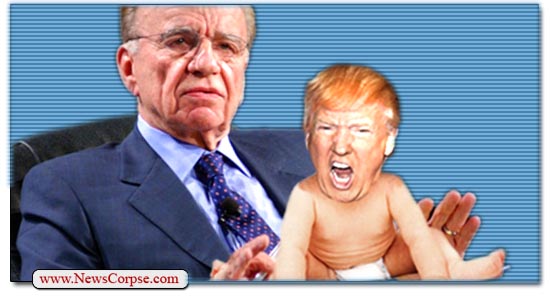 So rather than face reality and get back to work, Trump attacked the Wall Street Journal and Fox News (for some unexplained reason he let NBC slide). Trump was interviewed by Breitbart News where he asserted that the poll was fixed and that “It was a Rupert Murdoch hit.” He further claimed that “The worst treatment I get is from Fox,” despite the fact that he gets far more airtime than any other candidate. Trump was also interviewed for a full hour on MSNBC (a disgraceful affair, but that’s another story), and told the sycophantic plant life known as Joe Scarborough and Mika Brzezinski, that…

Clearly he doesn’t know. Or more likely he’s lying (see the Trump Bullshitopedia). Because a quick look at the facts show that the NBC/Wall Street Journal poll has been reliably favorable to Trump. Prior to this new poll they had him leading in all but one poll since he announced his candidacy. It is typical of Trump, however, to swing wildly when wounded. Therefore, this record of his polling, wherein he topped five of six polls, is regarded by him as “never doing well.” 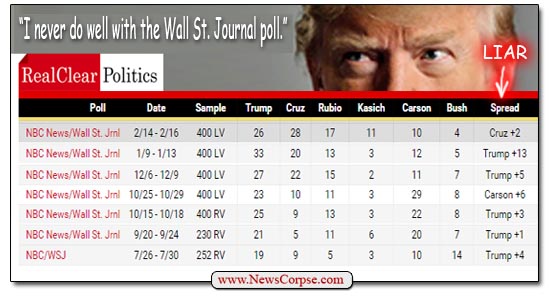 But Trump wasn’t finished. He continued his Twitter tirade to blast Fox News saying that “@FoxNews is so biased it is disgusting. They do not want Trump to win. All negative!” and that “.@FoxNews is changing their theme from ‘fair and balanced’ to ‘unfair and unbalanced.'” These would be reasonable complaints about Fox News except for the fact that Trump is utterly delusional. He has been the foremost beneficiary of the biases practiced at Fox.

After hearing Trump’s butt-hurt ranting, Rupert Murdoch, CEO of the media empire that includes both Fox News and the Wall Street Journal, had a bit of advice for the hyperventilating Trump. Murdoch tweeted…

“Trump blames me for WSJ poll, fights FoxNews. Time to calm down. If I running anti-Trump conspiracy then doing lousy job!”

It’s hard to disagree with Murdoch on this one. It’s obvious that his media properties have not been plotting anti-Trump campaigns. However, what Murdoch left out is that his outlets are responsible for creating Trumpenstein in the first place. Fox was not only not anti-Trump, they were so pro-Trump it was nauseating to watch. Now that Murdoch, Roger Ailes, and company, have reanimated the beast, they are begging it to “calm down.” Good luck with that, Rupe. You’ve made your cult, now you have to “lie” with it.