This morning there was an unprecedented attack by a former Republican presidential candidate on a current front-runner for the GOP nomination. Mitt Romney’s speech was a well constructed and impassioned plea to Republican voters to reject Donald Trump, whom Romney called a phony and a fraud. Romney’s speech covered a panoply of Trump’s abhorrent remarks and disastrous proposals. Video of Romney’s address is below, along with some select quotations. But first… 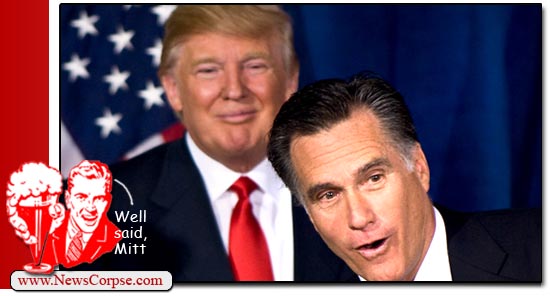 The response by Fox News immediately following Romney’s speech was swift and decidedly hostile to Romney. Fox host Jon Scott impaneled three guests to discuss the uncommonly harsh criticism of Trump. All three of them bashed Romney and predicted that the ensuing controversy would benefit Trump. It was a lock-step, unified condemnation of Romney in defense of Trump that didn’t bother to address a single substantive point from the address.

The post-speech analysis on Fox was followed by the regularly scheduled program, Outnumbered. And guess what? The reaction was identical to the three panelists who preceded them. Guest co-host Eric Bolling got the ball rolling by complaining that if Romney were sincere about his critique he should have come out with this speech sooner. Having failed to do that everything he said should be dismissed now. The rest of the cast of co-hosts generally agreed that because Romney lost the election in 2012 his electoral advice should be forever after ignored. But co-host Andrea Tantaros had the most cutting rebuke when she implored voters to tell Romney to “take it and shove it.”

After Outnumbered, Fox News continued their Romney-bashing with another panel of two contributors who both dismissed Romney as ineffective and irrelevant. The consistency of the stance against Romney was so thorough that, by all appearances, it could only have been planned in advance. There was clearly a directive sent down to the newsroom from the ivory tower office of Roger Ailes to trash Romney and defend Trump. Nothing else could explain the uniformity of thought by so many Fox personalities. And it is that type of uniformity that Fox News has always sought to ensure in order to manipulate the cultish disciples that watch the network.

Update: Romney predicted in his speech that Trump would respond “with every imaginable low road insult.” He called that one right. When Trump spoke at a rally in Portland Maine, he was obsessed with Romney’s 2012 loss and ignored every substantive issue that Romney raised. Then Trump proceeded with his robo-speech extolling his greatness and his promise to build a wall. And, of course, every cable news net covered live in its entirety despite the absence of any news value.

Here is the video of Romney’s speech, followed by some select quotes from the transcript that capture the tone of Romney’s warnings about a Trump presidency.

If Donald Trump’s plans were ever implemented, the country would sink into a prolonged recession. […] even as Donald Trump has offered very few specific economic plans, what little he has said is enough to know that he would be very bad for American workers and for American families.

But wait, you say, isn’t he a huge business success that knows what he’s talking about? No he isn’t and no, he doesn’t. His bankruptcies have crushed small businesses and the men and women who worked for them. He inherited his business, he didn’t create it. […] A business genius he is not.

Trump’s bombast is already alarming our allies and fueling the enmity of our enemies. Insulting all Muslims will keep many of them from fully engaging with us in the urgent fight against ISIS.

[T]his is an individual who mocked a disabled reporter, who attributed a reporter’s questions to her menstrual cycle, who mocked a brilliant rival who happened to be a woman due to her appearance, who bragged about his marital affairs, and who laces his public speeches with vulgarity. […] There is dark irony in his boasts of his sexual exploits during the Vietnam War while John McCain, whom he has mocked, was imprisoned and tortured.

Dishonesty is Trump’s hallmark: He claimed that he had spoken clearly and boldly against going into Iraq. Wrong, he spoke in favor of invading Iraq. He said he saw thousands of Muslims in New Jersey celebrating 9/11. Wrong, he saw no such thing. He imagined it. His is not the temperament of a stable, thoughtful leader. His imagination must not be married to real power.

Think of Donald Trump’s personal qualities, the bullying, the greed, the showing off, the misogyny, the absurd third grade theatrics. [..] Now imagine your children and your grandchildren acting the way he does. Will you welcome that?

The audio and video of the infamous Tapper-Trump exchange on the Ku Klux Klan will play a hundred thousand times on cable and who knows how many million times on social media.
There are a number of people who claim that Mr. Trump is a con man, a fake. There is indeed evidence of that. Mr. Trump has changed his positions not just over the years, but over the course of the campaign, and on the Ku Klux Klan, daily for three days in a row.

Mr. Trump is directing our anger for less than noble purposes. He creates scapegoats of Muslims and Mexican immigrants, he calls for the use of torture and for killing the innocent children and family members of terrorists. He cheers assaults on protesters. He applauds the prospect of twisting the Constitution to limit first amendment freedom of the press. This is the very brand of anger that has led other nations into the abyss.

Here’s what I know. Donald Trump is a phony, a fraud. His promises are as worthless as a degree from Trump University. He’s playing the American public for suckers: He gets a free ride to the White House and all we get is a lousy hat.

Not a bad rant for a Republican, conservative, establishment, one-percenter.