Yesterday News Corpse published an article on The Trump Effect that laid out how the media has a profit motive to keep Donald Trump in the race. The article included a quote from the CEO of CBS who confessed that, with regard to Trump, “It may not be good for America, but it’s damn good for CBS.” In other words, their lust for profit has a higher priority than their love of country. 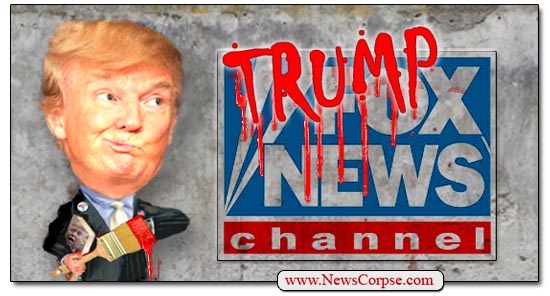 So what happened on Fox News last night could not have happened at better time. On the Kelly File, host Megyn Kelly did a segment with the Fox News media correspondent and host of Fox’s MediaBuzz, Howard Kurtz. The discussion began with Kelly asserting that “a lot of the media, they love Trump.” That’s an understatement, particularly after exploring the Trump Effect and the profound financial incentive the media has to extend his place in the limelight. They are doing everything they can to keep his face in front of voters and maintain his electoral viability. Which led to this revealing exchange:

Kurtz: Now Cruz has made this argument in recent days, and Marco Rubio as well, that the media has focused so much attention on Donald Trump. They love Donald Trump. They’re rooting for Donald Trump. At least until the fall.
Kelly: But they do. If you look at the numbers even on the nightly newscast — the time they devoted just in the past night — last night to Donald Trump vs the other two, it was six minutes Trump, I think seven seconds, Rubio. I mean, the disparity was remarkable.
Kurtz: There’s a clear imbalance. And we’ve all had banners awaiting Trump news conference, which shows how he can hijack the news cycle. But a lot of that attention has been negative.

Kelly had finally admitted something that has been true for more than half a year – that the coverage of Trump by the media has been wildly out of proportion to the rest of the candidates of both parties. While Kurtz only mentioned that Ted Cruz and Marco Rubio had complained about this, last December Bernie Sanders told Chris Cuomo of CNN about a study that showed that Trump received 81 minutes of airtime on ABC News in 2015 while Bernie Sanders got 20 seconds.

The response by Kurtz to Kelly’s revelation, however, was painfully oblivious to reality. First of all, he tried to blame Trump for the imbalance by accusing him of “hijacking the news cycle.” Which makes you wonder if Kurtz knows the definition of “hijack.” Trump did not storm the studio and force the news producers at gunpoint to put him on the air. They did that all of their own accord. It was more of a gift from the press than a hijacking by Trump. If the media didn’t want to put him on then he wouldn’t be on, and there would be nothing he could do about it. Just ask Bernie Sanders.

Following that absurd portrayal of events, Kurtz then attempted to conflate two completely different issues. By veering off to say that “a lot of that attention has been negative,” he was changing the subject from the free airtime that Trump got to the amount of time spent discussing him. But that isn’t the problem that was raised by observing how much time Trump got every time he gave a stump speech. The cable news networks seem to cut to him live whenever he holds a rally. And, of course, they don’t do that for anyone else. That’s the problem, and Kurtz appeared not to want to acknowledge it.

The most striking part of this whole segment, though, was how both Kelly and Kurtz spoke about the media as if it were a detached entity that had nothing to do with them. However, the truth is that Fox New is the network that is most responsible for the coverage imbalance that they both concede exists. No network gives Trump more airtime than Fox News. And on Fox, no candidate receives as much airtime as Trump. So it was a bit disorienting to hear these two pretend that the Trump Effect was just some vague theory that was floating around and impacted all of the media equally. They may have come closer to representing reality by admitting that the media roots for Trump, but they continue to lie about their decidedly prominent role in the cheering section.