Fox News takes pride in its ability to destroy the lives of people it opposes politically. They had a hand in the assassination of abortion provider Dr. George Tiller, whom they labeled “the baby killer.” And several “lone wolf” nuts tied to Fox broadcasters have been thwarted prior to executing their plans to murder “enemies” of the Fox Nation.

The latest target of demonization by the Smear Squad at Fox News is billionaire investor, George Soros. Actually, they have been on Soros’ trail for months, but they have lately escalated the rhetoric and its overtly hostile tone. Several Fox presenters have portrayed Soros as a mysterious and dangerous character. They cast him as “foreign” and “secretive.” Of course, the truth is just the opposite. Soros is every bit as American as Rupert Murdoch, and his participation in public affairs is always disclosed openly, contrary to Murdoch whose recent funding of partisan GOP organizations was done in secret and only became known via third party disclosures and against Murdoch’s wishes.

Glenn Beck, the inspiration to many rightist would-be assassins, has scheduled a full hour of hate speech next Tuesday dedicated to Soros that Beck is promoting as “D-Day for George Soros.” Beck has called Soros the “puppetmaster” controlling all manner of evil in the world. From socialists to Nazis to the collapse of free-market capitalism, Soros is accused of being the invisible hand behind it all. Beck tagged Soros “the most powerful man in America.” That’s hard to grasp when he isn’t even in the top 25 of the richest, according to Forbes. By the way, the Saudi Prince Alwaleed bin Talal (the second biggest shareholder of News Corp outside of the Murdoch family) and the oil-rich Koch brothers (financiers of the AstroTurf Tea Party movement) are all in the top 25. And somehow they are still less powerful than Soros according to Beck. 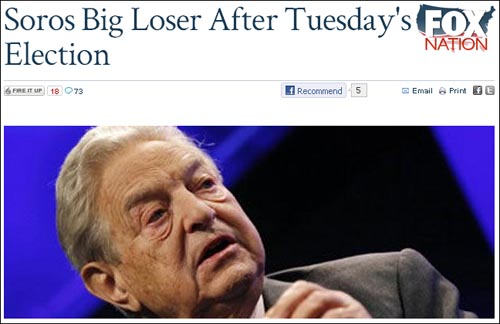 In advance of Beck’s special anti-Soros episode, Fox Nation has published a hit piece that declares “Soros [the] Big Loser After Tuesday’s Election.” The gist is that due to the poor showing of Democrats, Soros’ political donations went to waste. However, Soros made no donations whatsoever to Democratic campaigns or partisan committees this cycle. He even made a public statement to that effect asserting that he didn’t think his participation would stem the GOP tide. The article focused on Soros’ support for the Secretary of State Project, a 527 whose mission is to support candidates for Secretary of State who will advance voter access and participation. However, Soros didn’t contribute to that in this cycle either. His only support for it was $10,000 in 2008. Hardly a game changer.

Soros did make sizable donations to media organizations like Media Matters and NPR, and he supported the marijuana initiative in California. But he had no investment in the electoral arena, and that completely negates the whole premise of the Fox Nation’s article.

Ironically, the argument that Soros is a loser because Democratic candidates lost deflates Beck’s argument that he is the most powerful man in America. That title ought to go to the Koch brothers or Karl Rove or any of the other multimillion dollar entities that bankrolled the winning GOP campaigns. But I wouldn’t hold my breath waiting for Beck’s special one hour anti-Koch episode.

So while we’re waiting for Beck to unveil his smear job on Soros next week, Fox Nation’s article provided an opportunity for the Fox Nationalists to weigh in on what they believe should become of Soros. And guess what they said (screen cap)…..

wilsonglock: Somebody needs to “find” this guy !!!!! He has created enough problems in America and around the world…..Are there any “bounty” hunters out there willing to get rid of this creep…???

theoutlawjoseywhales: Soros is a criminal, who has destroyed 4 countries, were number five, but we won’t go so easily. Soros, we’re going to hunt you down and have our justice for your crimes against us. Count on it.

texascherokee: George, a Small Consolation Gift will be arriving soon, from about 300 yards!

sam@yahoo: Someone put a prize on the pig’s head,let some patriots go on the hunt for that beast!

The Fox Nationalists are openly calling for assassination. I reviewed the website three hours after I first saw these comments (and flagged them for being inappropriate) and they were still there. There is nothing ambiguous about the intentions expressed here. It is utterly irresponsible for Fox to permit this sort of advocacy of criminal violence. Or maybe this is what they mean when they say “All Opinions Welcome” (although my comments are rarely posted).

For this to appear on Fox’s website so soon after a real life tragedy was narrowly averted is unconscionable. Just last July a deranged fan of Glenn Beck’s embarked on a mission to murder people associated with the ACLU and the Tides Foundation, a beneficiary of Soros’ donations. From Media Matters:

On July 18, Byron Williams, an ex-felon with a history of violent criminal behavior, was pulled over by California Highway Police on I-580. Williams, who was apparently intoxicated, opened fire at the officers as one approached his truck. […] Williams reportedly told investigators that “his intention was to start a revolution by traveling to San Francisco and killing people of importance at the Tides Foundation and the ACLU.

What are we to expect now from Beck’s hour long assault on Soros, whom Beck calls “Spooky Dude” (as if there could be someone spookier than Beck)? Despite his regular pleas that his disciples refrain from violence, Beck knows all to well that many believe he is just saying that to stay within legal boundaries. Beck himself even told his congregation that…

“I can only say certain things, and I haven’t lost all of the rights. But know that these things are true. And if you hear me stop saying these things, it’s because I can no longer say them to you. But hear them between the sentences. Hear them, please. I will be screaming them to you.”

Beck has also told his audience that Soros is trying to silence him. That is Beck’s explanation for Soros’ donation to Media Matters. And worse than that, Beck has implied that Soros wants to kill him. In one rant Beck pointedly looked at the camera and addressed Soros, warning him that he (Beck) has a bulletproof car.

So let’s put this puzzle together:

1) Beck accuses Soros of being a general threat to America and the freedom of all citizens.
2) Beck asserts that Soros is a specific threat to Beck’s personal freedom to speak, and even his life.
3) Fox Nation is packed with explicit death threats aimed at Soros.
4) Beck advises his listeners that they have to read between the lines to hear his real message.
5) Beck’s opus on Soros will debut Tuesday November 9, 2010, with an hour’s worth of sentences to read between.

This is about as close to a solicitation for murder as you can get. Beck has demonized his target and warned his faithful followers that he is need of their defense and/or vengeance. His followers have heard the call as evidenced on Fox Nation. And even if there is nothing controversial in Beck’s new Soros documentary (or more controversial than usual), the damage he and Fox have done already is sufficient cause for concern. He may merely repeat the same lies he has been telling about Soros for months. But the cumulative effect of the components of this campaign against Soros could have tragic consequences – again. And Beck, along with Fox News, must be held accountable. A movement has already begun to let Fox’s advertisers know that they bear some responsibility as well. Sign the petition here.

Despite Beck’s disingenuous pleas for peace, he knows the potential for violence that his words produce, Why else would he have to repeatedly admonish his viewers to be peaceful? Is there any other television host who feels it’s necessary to remind his/her audience to not kill people? I’m pretty sure Alex Trebek doesn’t have that problem. Oprah went 26 years without having to do it. But Beck has already produced violent actors yet he persists in fanning the embers of hate.

This makes it all the more important to persuade people of good will in the media and in the advertising communities to be responsible and disassociate themselves with Beck, Fox News, and any other enterprise that incites such violence.

22 thoughts on “Will Fox News Be Happy When George Soros Is Murdered?”