For the past eight years Fox News has raked President Obama over the coals alleging (falsely) that he doesn’t believe in American exceptionalism. It became a fixed component of their formulaic anti-Obama messaging that dove-tailed with their attacks on his patriotism and demands to see his birth certificate. They wanted to know how he could possibly be president if he didn’t have an all-consuming sense of national superiority.

If you love America so much why don’t you marry it? 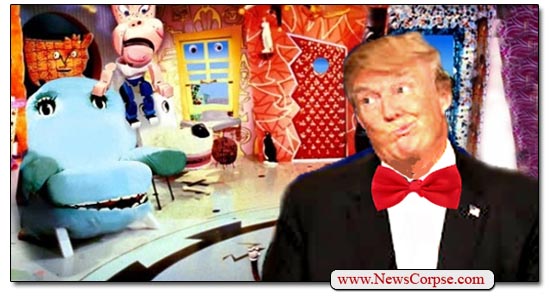 For the record, Obama frequently articulated a deep and personal gratitude for his homeland and cited his own remarkable career as evidence of what makes America exceptional. But that wasn’t enough for the tunnel-blind Fox Newsers and Republicans who don’t see or hear anything that conflicts with their bigoted preconceptions.

So what will they do now that Donald Trump has explicitly said that he doesn’t believe American exceptionalism, as he did recently at a meeting of Tea Party “patriots” in Texas? Do you think the GOP and Fox zombies will mind? Try and wade through this dialogical disgorgement to see exactly what Trump thinks of the country he says he will make great again:

“I don’t like the term. I’ll be honest with you. People say, ‘Oh he’s not patriotic.’ Look, if I’m a Russian, or I’m a German, or I’m a person we do business with, why, you know, I don’t think it’s a very nice term. We’re exceptional; you’re not. First of all, Germany is eating our lunch. So they say, ‘Why are you exceptional. We’re doing a lot better than you.’ I never liked the term. And perhaps that’s because I don’t have a very big ego [audience laughs] and I don’t need terms like that. Honestly. When you’re doing business — I watch Obama every once in a while saying ‘American exceptionalism,’ it’s [Trump scowls]. I don’t like the term. Because we’re dealing — First of all, I want to take everything back from the world that we’ve given them. We’ve given them so much. On top of taking it back, I don’t want to say, ‘We’re exceptional. We’re more exceptional.’ Because essentially we’re saying we’re more outstanding than you. ‘By the way, you’ve been eating our lunch for the last 20 years, but we’re more exceptional than you.’ I don’t like the term. I never liked it. When I see these politicians get up… ‘the American exceptionalism ‘- we’re dying. We owe 18 trillion in debt. I’d like to make us exceptional. And I’d like to talk later instead of now. Does that make any sense? Because I think you’re insulting the world. And you, know, Jim, if you’re German, or you’re from Japan, or you’re from China, you don’t want to have people saying that. I never liked the expression. And I see a lot of good patriots get up and talk about Amer… — you can think it, but I don’t think we should say it. We may have a chance to say it in the not-too-distant future. But even then, I wouldn’t say it because when I take back the jobs, and when I take back all that money and we get all our stuff, I’m not going to rub it in. Let’s not rub it in. Let’s not rub it in. But I never liked that term.“

Did you sort of get the feeling that Trump doesn’t like the term American exceptionalism? If you managed to make it through that nearly incoherent rambling, you will also have noticed that, not only does Trump not believe that America is exceptional, he doesn’t believe it’s even adequate. He rattles off a long list of failings that portray a “dying” America as inferior to many other nations who are “eating our lunch.” No wonder he titled his book Crippled America.

The question now is whether Fox News and the robo-conservatives will hold Trump to the same standard that they held Obama. Will they condemn him as traitorous and unfit to lead a nation of patriotic narcissists? Or will they convince themselves that this never happened and their hero is still the anointed orange savior of America? I think we already know the answer.