After two years and seven million dollars, the Republican Committee on Politicizing Benghazi finally issued a report on their findings. And, to no one’s surprise, the result of this lengthy and expensive charade reveals absolutely nothing of significance that wasn’t already known or reported by one of the seven other congressional committees that wasted taxpayer dollars on this transparently political witch hunt.

Almost immediately following the release of committee’s report Fox News shifted into offense in an effort to hurl mud at Clinton. The absence of anything substantive to report didn’t deter them from their mission. As an indication of how the media reported this news event, take a look at the on-screen graphics of the three cable news networks: 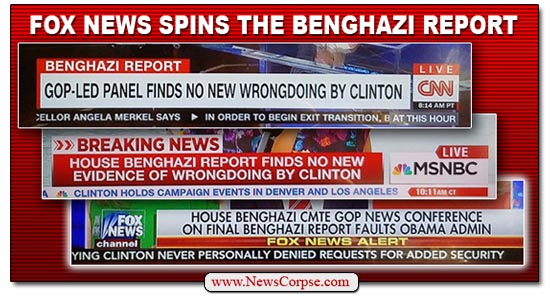 Both CNN and MSNBC correctly reported that committee failed to deliver on their promises of criminality by Clinton. Fox News, on the other hand, tweaked their reporting to refer to the GOP’s press conference rather than the contents of the actual report. So their graphics faulted the Obama administration because that’s what the Republicans at the press conference were predisposed to discuss. Never mind that their own committee’s report did not support their criticisms. Even the Fox News crawl, during this segment, noted that “Clinton never personally denied requests for added security.”

Fox News spent much of the day slandering Clinton with innuendos that had nothing to do with the report. On Outnumbered Jedediah Bila said that “It doesn’t bother her that people died.” Fox’s national security analyst, K.T. McFarland, said that Clinton has “blood on your hands.” Dana Perino of The Five inexplicably called for yet another Benghazi investigation. Notice that none of these comments addressed any of the report’s actual findings, preferring instead to fling insults and malicious opinions.

Republicans had long ago exposed themselves as the perpetrators of a partisan assault on Hillary Clinton in advance of her campaign for the presidency. Their Speaker-in-Waiting, Keven McCarthy, bragged about his anti-Clinton plot to Sean Hannity saying that “Everybody thought that Hillary Clinton was unbeatable, right? But we put together a Benghazi special committee, a select committee. What are her numbers today?” Well, since you asked, Clinton’s numbers today put her twelve points ahead of Donald Trump, and McCarthy was bumped from his speakership path and replaced by Paul Ryan.

The Benghazi investigation lasted longer than any previous congressional investigation, including the JFK assassination, the Nixon Watergate affair, and 9/11. It’s budget exceeded that of the House Intelligence Committee and the Veterans Committee combined. Yet it found not a single bit of evidence of any wrongdoing by Clinton or the Obama administration. So Fox News chose to ignore the report’s conclusions and instead engage in ad hominem smear tactics. That is, after all, what they were created to do.

One thought on “With Nothing To Pin On Hillary Clinton, Fox News Furiously Spins The Benghazi Panel’s Pointless Report”