The controversy over Melania Trump’s plagiarized speech at the Republican National Convention stubbornly refuses to go away. Following the initial revelation that several passages were blatantly lifted from a 2008 speech by Michelle Obama, Donald Trump’s defenders mobilized to deny reality and try to convince America that they could not believe their own eyes and ears. 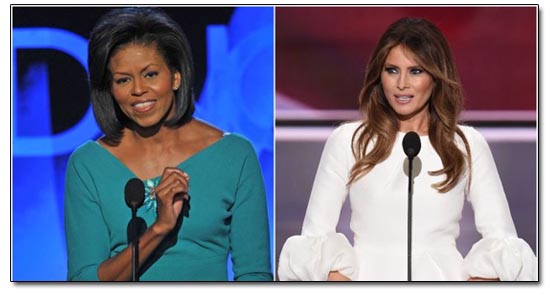 The Trump campaign manager, Paul Manafort, dismissed it as being a coincidental collection of commonly used words. That was after he baselessly blamed it all on Hillary Clinton. Chris Christie excused it because only part of it was plagiarized. Trump spokesperson Katrina Pierson complained that Michelle Obama thinks she “invented the English language.” RNC Spokesman Sean Spicer turned it back on Michelle Obama saying that she plagiarized My Little Pony. Trump Communications Director Jason Miller reduced it to “included fragments that reflected her own thinking.” The Trump people simultaneously said that Melania wrote the speech herself (which she told NBC’s Matt Laurer), but that any problems were the fault of her team of writers.

Today the speechwriter came forward with a totally new account of what happened. She released a letter on Trump Organization stationary (image below) taking the fall for the whole affair:

“My name is Meredith McIver and I’m an in-house staff writer at the Trump Organization. I am also a longtime friend and admirer of the Trump family.”

“In working with Melania Trump on her recent First Lady speech, we discussed many people who inspired her and messages she wanted to share with the American people. A person she has always liked is Michelle Obama. Over the phone, she read me some passages from Mrs. Obama’s speech as examples. I wrote them down and later included some of the phrasing in the draft that ultimately became the final speech. I did not check Mrs. Obama’s speeches. This was my mistake, and I feel terrible for the chaos I have caused Melania and the Trumps, as well as to Mrs. Obama. No harm was meant.”

So it turns out that the lines were indeed lifted from Obama’s speech after all. And it was Melania who did it. McIver is taking responsibility for not checking Melania’s work. However, everyone on the Trump team who vociferously denied any remote possibility of plagiarism, even ridiculing the notion, are now exposed as either liars or fools.

McIver went on to say that she offered Trump her resignation, but that he refused to accept it saying that “people make innocent mistakes.” This was an “innocent mistake” that made Melania look awful in her national coming out, and resulted in two days of distractions from the whatever messages Trump was hoping to convey at the convention. (That may be a blessing in disguise considering the fright-fest that Trump put on yesterday). And in the end, Trump thinks it was all a positive development:

Good news is Melania's speech got more publicity than any in the history of politics especially if you believe that all press is good press!

Almost as significant as the admission that the speech was plagiarized is the discovery that Michelle Obama is “A person [Melania] has always liked.” That may not sit well with a crowd that regards the Obamas as foreign interlopers bent on destroying America. For the record, Donald Trump was also a big fan of Obama at one time, as he wrote in his book “Think Like A Champion.”

Apparently Melania et al couldn’t find any Republican women who expressed the same values that Michelle did. But stealing lines from a historic speech is a funny way of showing your admiration. And that’s why this episode remains significant. It demonstrates that Trump’s fabled management skills are just another fraudulent PR scam. This speech would have to have been reviewed by numerous people before allowing the candidate’s wife to take it out onto the stage. But they couldn’t handle something as simple as sourcing a speech. And Trump’s want’s us to trust him with the nuclear codes? 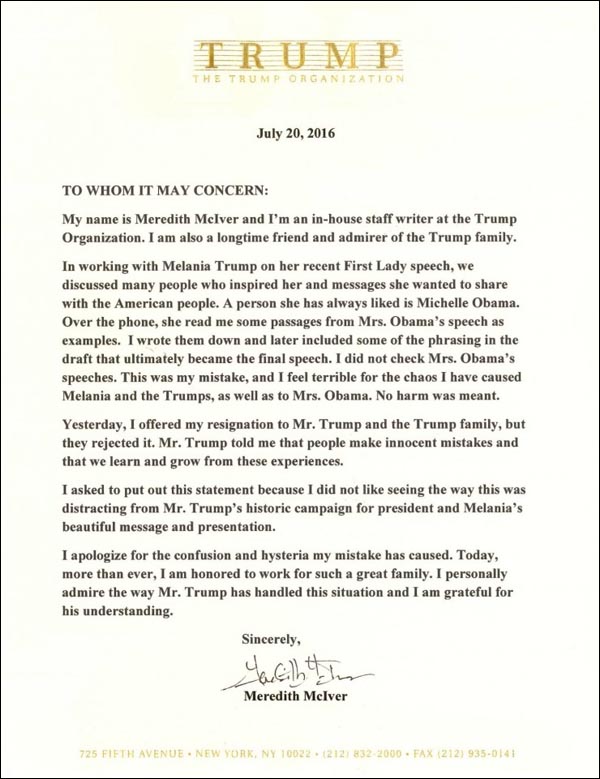