One of the most persistent criticisms of Donald Trump is that he’s been running for president for over a year and has failed to articulate a single policy in any detail. His platform is made up entirely of vapid slogans (“Make America Great Again”), simplistic one-liners (“Build a Wall”), and childish insults (“Crooked Hillary”). Rest assured that as he accepts the Republican Party’s nomination for president tonight he won’t be any more forthcoming about how he intends to achieve his vaguely stated goals. 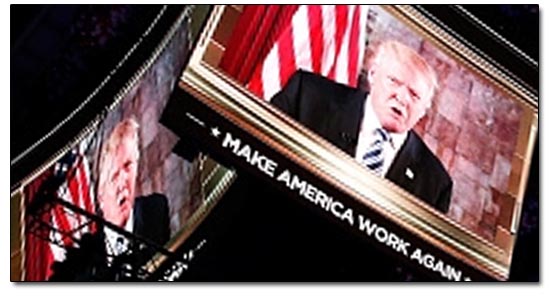 Consequently, we should be grateful that his surrogate, Gov. Chris Christie, is shooting his mouth off in private meetings with GOP donors. It is in these settings that Republicans often reveal their true intentions as they seek to squeeze funds from their wealthy benefactors. Yahoo news is reporting that:

“If he wins the presidency, Republican presidential nominee Donald Trump would seek to purge the federal government of officials appointed by Democratic President Barack Obama and could ask Congress to pass legislation making it easier to fire public workers, Trump ally, Chris Christie, said on Tuesday.

Christie, who is governor of New Jersey and leads Trump’s White House transition team, said the campaign was drawing up a list of federal government employees to fire if Trump defeats Democratic rival Hillary Clinton in the Nov. 8 presidential election.

“As you know from his other career, Donald likes to fire people,” Christie told a closed-door meeting with dozens of donors at the Republican National Convention in Cleveland.

Chris Christie is in a position to know what he’s talking about. He is a leading candidate to assume a prominent role in a Trump administration, i.e. Attorney General or Chief of Staff. And he shares Trump’s visceral hatred of President Obama, so he would be anxious to erase any remnants of his historic presidency.

Government purges are a tactic that has been popular with fascist regimes for decades. It is a means of consolidating power, imposing ideological conformity, and insuring loyalty. But it is grossly undemocratic and contrary to the principles of a free society. In the United States the concept of “career” employees has been valued because it results in decisions being made on merit rather than political partisanship. Even the threat of political purges can sway agency staffers to adopt positions that are overtly harmful in order to please their current bosses rather than the public whom they serve.

The last notable example of this type purge occurred during the administration of George W. Bush. He took the wholly unprecedented and unethical action of firing staff attorneys at the Justice Department and replacing them with lackeys who would do his bidding. That led in part to an email scandal that dwarfs anything Hillary Clinton has been accused of.

The purge that Christie spoke of goes far beyond what Bush did at the Justice Department. Under a President Trump every agency of government would be at risk. The Environmental Protection Agency could be stuffed with pro-coal and oil shills who would obliterate regulations that have proven to be effective in cleaning the air and water in America. Health and Human Services could become the headquarters for dismantling ObamaCare. The Department of Labor could be restructured to serve corporations and diminish the influence of unions. The Department of Education could begin to kill off public schooling in favor of vouchers and faith-based alternatives. And just imagine the harm that could be done with extreme hawks populating the Homeland Security and Defense departments.

This is just another of Trump’s secret agendas that make him an existential threat to the nation – and the world. Some of what he is plotting isn’t known because he refuses to disclose anything significant about policy, or even personally (such as his ultra-secret tax returns). Some of it isn’t known because he has no idea what he believes to begin with. What we do know about his governing philosophy we’ve learned by his inadvertent slips of the tongue to the press. For instance, yesterday he said that he would not necessarily honor our mutual defense agreements under the terms of the NATO treaty. Revelations like the one Christie has provided helped to torpedo Mitt Romney’s campaign in 2012. And that’s why the press needs to aggressively seek out information that the candidates strive to conceal. Democracy depends on it.