Tonight Donald Trump will be making his HUGE speech to accept the Republican Party’s nomination for president of the United States. It’s ironic, therefore, that the man most responsible for his victory over seventeen other Republican hopefuls just got his ass booted out the door. 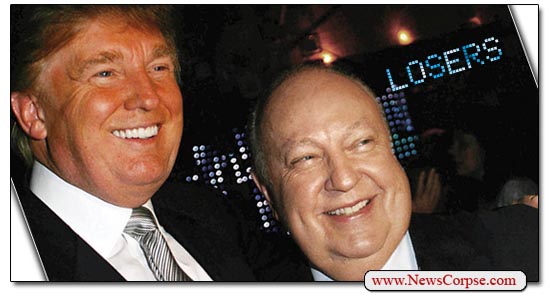 Roger Ailes, Chairman and CEO of Fox News, has accepted a separation agreement that is effective today. It was only three days ago that the strange saga of Ailes was first reported. The unusually rapid progress of events that resulted in Ailes’ surprise termination followed the filing of a lawsuit by former Fox News host Gretchen Carlson alleging that Ailes sexually harassed her and then retaliated after she reported prior incidents of harassment and gender discrimination. The suit alleges that Ailes told her “I think you and I should have had a sexual relationship a long time ago.” Shortly after Carslson’s lawsuit hit the press several other women came forward with similar complaints.

Ailes released a statement saying in part, “I am proud of our accomplishments and look forward to continuing to work with you as a consultant in building 21st Century Fox.” Fox sources, however, say that he will not be an official consultant, but will be available to informally advise his old pal Rupert Murdoch, CEO of the Fox News parent corporation 21st Century Fox.

Ailes’ long history of exploiting sex in the workplace has been well documented. The environment at Fox is known for making inappropriate demands on female staff, including wearing revealing clothes and engaging in other provocative behavior on-air. Gabriel Sherman wrote in his biography of Ailes, “The Loudest Voice In The Room,” that Ailes has repeatedly given direction to his staff regarding the display of female body parts.

As Donald Trump takes the stage tonight at the Republican National Convention, the propaganda machine that made it possible is undergoing a severe upheaval. There is no clear line of succession in the executive ranks. Rupert Murdoch will be temporarily assuming the role of interim CEO. And as the dust settles it will be Murdoch’s kids who will be calling the shots and filling the vacancies. There are likely to be other shoes dropping in coming weeks, so stay tuned for further developments.