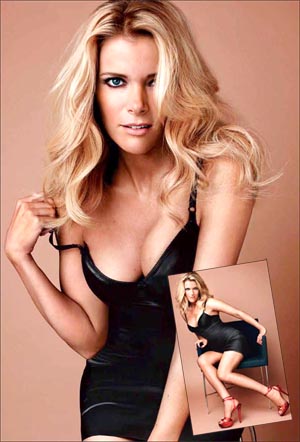 Much has been made about the curious “coincidence” that almost every female Fox News anchor is a young, attractive blond. I’m sure there is an innocent explanation for it. But anyone at Fox who complains about them being characterized as eye candy hired to exploit their sexuality had better first take a look at Megyn Kelly’s new spread for GQ Magazine. It’s not exactly a play for journalistic integrity.

Setting aside the cheesecake, Kelly is hardly a journalist. She makes headlines out of trivialities and seeks to sensationalize items that would be cut from the National Enquirer. Her stories about the New Black Panther Party never put into context that they were a tiny band of gadflies that no one took seriously. Her reports on the financing of the non-mosque that was not at ground zero were embarrassingly devoid of any evidence of the allegations she made. If you’re wondering why she hasn’t reported on that lately, it may be because her correspondent for the story, Charles Leaf, is in jail awaiting trial for sexually assaulting a four year old girl.

The feature in GQ includes an interview wherein Kelly reveals how seriously she takes her job as a journalist:

GQ: You sit behind a glass table that shows off your legs.
Kelly: Well, It’s a visual business. People want to see the anchor.

That must be why Bill O’Reilly wears those low-cut blouses. In another example of her commitment to news, she was asked…

GQ: Do you think the act of deciding what to cover and what not to is in itself a political act?
Kelly: It’s not political. Television is a service but it’s also a business. And in choosing what you’re going to put on your program, you have to figure out what’s going to appeal to your audience and what’s going to rate.

That explains the incessant bashing of liberals as well as the glass table. But how pathetic that she anchors a so-called news show and thinks that ratings should be the measure of what constitutes news. She goes on to boast about Fox being the number one cable news channel. But somehow she is not familiar with her colleagues on the network. She asserts that “I really don’t know much about the Glenn Beck empire.” However, she supports his right to free speech. To this GQ asked…

GQ: There’s the First Amendment and then there’s spreading obvious misinformation.
Kelly: That happens at a lot of channels. I think some of those allegations against Beck may have foundation and that some are blown up by detractors.
GQ: Which allegations have foundation?
Kelly: I’m not going to get into specifics.

That’s swell. Kelly just declared that at least some of the allegations about Beck spreading misinformation are true. Let that sink in for a minute. One news network anchor is accusing her colleague of saying things on the air that are obviously false. Can you imagine the uproar if Anderson Cooper were to have said that about Wolf Blitzer? But my guess is that no one will even notice this. After all, everybody expects to be misinformed if they’re watching Fox News. It hardly matters if it’s Beck or Kelly or Hannity or Cavuto or O’Reilly. In fact, Kelly can hardly complain because she is just as guilty as Beck of misinforming her audience.

I suppose that if you believe that misinforming viewers is no big deal, and that ratings should decide news content, and that partisan, sensationalism is a reasonable substitute for honest reporting, then it shouldn’t surprise anyone when you pose for risque centerfolds for men’s magazines. Just please don’t ask to be taken seriously as a journalist.