At last July’s Republican convention, the party went to great lengths to portray themselves as united behind their nominee. It was an uphill effort considering many of the most prominent members of the party were openly contemptuous of him. Donald Trump had alienated a broad swath of his colleagues. His childish insults, flagrant bigotry, and embarrassing ignorance didn’t sit well with party regulars. Many refused to attend the convention, including the governor of the state that hosted it. 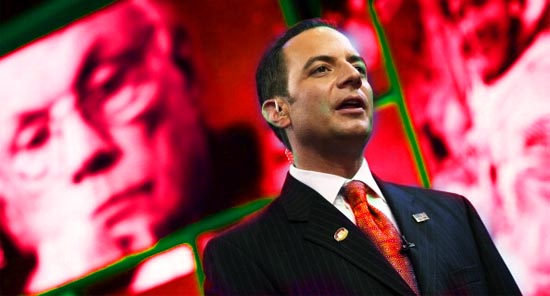 During the course of the primary Trump made up disparaging nicknames for his opponents (Little Marco, Lyin’ Ted, etc.), belittled John McCain’s heroism, mocked Carly Fiorina’s looks, and maligned other respected Republicans including past presidents. As Trump transitioned into the general election he continued to estrange his peers and discount their usefulness to his campaign. Consequently, former candidates like Ted Cruz, Jeb Bush, and John Kasich have refused to endorse him. Many others have announced their support for Hillary Clinton. The list of Republicans who are abandoning their party over Trump grows by the day.

Now the Republican Party has decided to crackdown on these drifters. Reince Priebus, chairman of the Republican National Committee told John Dickerson on Face the Nation (video below) that wayward Republicans “need to get on board.” He made thinly veiled threats that anyone who fails to support Trump could be prohibited from running as a Republican in the future:

“If they’re thinking they’re gonna run again someday, I think we’re gonna evaluate the nomination process and I don’t think it’s gonna be that easy for them. […] If a private entity puts forward a process and has agreement with the participants in that process, and those participants don’t follow through with the promises that they made in that process, what should a private party do about that if those same people come around in four or eight years?”

In other words, fall in line or be cast out as heretics. Dickerson noted that “It sounds like a brush-back pitch,” to which Priebus coyly grinned but did not deny. In fact, Priebus was letting the stragglers know that they could suffer penalties for their independence. In order to be a Republican candidate, he implies, one has to conform to the party’s demands. Of course, Priebus has no legal authority to decide who can run as Republican and who cannot. Anyone who registers as a candidate and meets ballot access requirements can mount a campaign.

The attempt by Priebus to strong arm party members into compliance is unprecedented and unenforceable. But mostly it reveals the shaky foundation of the party’s professed unity. It shows that their candidate is so toxic that they have to employ threats to secure support. The list of anti-Trump Republicans includes many of the party’s most respected leaders. In addition, fifty top GOP national security officials publicly condemned Trump as not qualified to be commander-in-chief. They warned that he would be “the most reckless President in American history.” Most recently former Defense Secretary Bob Gates wrote a scathing editorial for the Wall Street Journal in which he said that “A thin-skinned, temperamental, shoot-from-the-hip and lip, uninformed commander-in-chief is too great a risk for America.”

In this environment it is going to be hard for Priebus to enforce his autocratic ultimatum. Too many free thinking Republicans are horrified that their party has been hijacked by a celebrity ignoramus. They are unwilling to bow down to an unstable, tantrum throwing, narcissistic, wannabe dictator. And no matter how much party apparatchiks like Priebus complain, Trump will never unify the party. To the contrary, his campaign from the start has sought to upend it. On that measure he can claim a somewhat dubious victory.