An explosive device was thrown through the window of a Republican Party office in Hillsborough, North Carolina yesterday. The perpetrators left a disturbing warning in spray paint saying “Nazi Republicans, leave town or else.” This act of violence is contemptible and indefensible. But the reaction to it has also highlighted the differences between responsible Democrats and the human firebomb, Donald Trump. 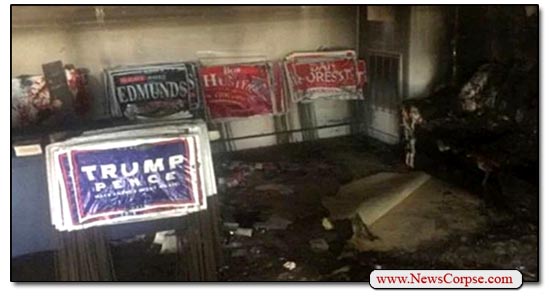 Immediately after the news broke, Hillary Clinton expressed her disapproval and sympathy. She tweeted that “The attack on the Orange County HQ @NCGOP office is horrific and unacceptable. Very grateful that everyone is safe.” By contrast, Donald Trump posted his own tweet with a somewhat different message. He said that “Animals representing Hillary Clinton and Dems in North Carolina just firebombed our office in Orange County because we are winning @NCGOP.”

Trump’s approach to this crime is typical of his emotionally stunted relationship to the world around him. His first instinct is to insult and dehumanize his perceived enemies as “animals.” Then he assigns blame to them despite having no evidence of responsibility. And finally he politicizes the act for his personal gain. For the record, Clinton is leading in North Carolina in every recent poll.

The police are still combing over the crime scene and have not released any details of their investigation. But before drawing conclusions, people should ask themselves the old question in these circumstances: Who benefits? Clearly this sort of behavior would only be detrimental to Clinton’s campaign. So who would benefit from engaging in it? Certainly not Clinton. Nevertheless, Trump makes the illogical jump to condemn her rather than his own violence prone followers who stand to profit from the false implication.

But that’s not the only demonstration of how Democrats react responsibly when tragedy strikes. Within a few hours of the bombing there was a fundraising appeal posted to the website GoFundMe. Democrats sought to raise money to help the GOP reopen their office. The appeal condemned the bombing as “abhorrent” and declared that “this is not how Americans resolve their differences.”

The response was swift and inspiring. It took less than four hours to exceed their goal of $10,000. More than 500 people donated to the cause. Typical of the comments from donors was one that read “I’m a Democrat but I don’t believe in violence.” Another donor said “This act of terror was an attack on all of us. In moments like these, there’s no partisanship. We’re all Americans. We stand by you.”

That’s the proper way to address situations like this, especially before any facts are known. Americans generally reject violence as a political tactic. They come together to restore the victims and renounce the perpetrators.

Ironically, it’s Trump who regularly incites violence at his rallies. He’s currently making baseless charges of a rigged election that are roundly criticized as harmful to democracy and potentially dangerous. His response to this incident is in line with that and only encourages further animosity. Trump and his followers should take a lesson from the Democrats who promote peace and unity in the face of violence. Sadly, based on Trump’s response, they are not likely to do that.