On Saturday, Donald Trump devoted much of his stump speech to attacking Hillary Clinton for appearing with several music superstars. Her campaign event in Cleveland featured Beyonce and Jay Z. She also recently appeared with Jennifer Lopez, Katy Parry, and Stevie Wonder. And Bon Jovi and Bruce Springsteen are coming up. 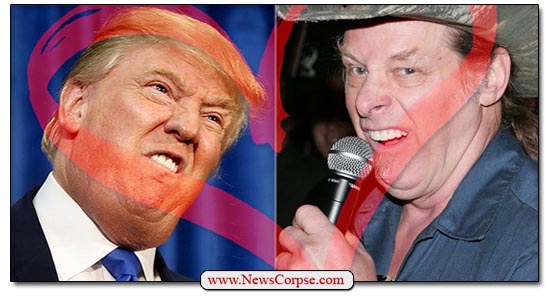 Trump’s criticisms amounted to another rash of whining and bragging. Since he can’t get any beloved icons of entertainment to support him, he complains that it’s “cheating” if Clinton does. And anyway, he doesn’t need them because he’s just that awesome. On his scarcity of star power, Trump bragged:

“We didn’t bring any so-called stars along. We didn’t need them. The reason Hillary has to do that is, nobody comes for her. She can’t fill a room. That’s almost like a form of cheating, right?”

And on the injury to his tender sensitivities, he whined:

Which makes it all the more blatantly hypocritically that Trump will be campaigning with 1970’s washout rocker, Ted Nugent, Sunday night. If he doesn’t want celebrities boosting his campaign he’s still in the clear. Nugent is hardly a celebrity. He’s spent the last few decades performing as a novelty act at state fairs and shilling for the NRA. But it still demonstrates Trump’s tunnel-blind view of the world as he seeks to exploit his own famous deplorables.

What’s worse is Trump’s forgiveness of Nugent’s repulsive commentaries for the past several years. Trump may not like Jay Z using language that is relatable to his hip-hop audience, but it doesn’t come close to Nugent’s offensive outbursts aimed at his political enemies. For instance:

Perhaps the most appalling of Nugent’s public meltdowns was a video that went viral a few years ago. It showed him utterly unhinged at a concert where he fantasized about killing several Democratic politicians. While brandishing what appeared to be a couple of automatic weapons, Trump bellowed:

That’s the sort of moral support that Trump is embracing just one day after castigating Clinton’s celebrity supporters. And it isn’t coincidental that most of his targets are women. Nor is it surprising that Trump has such affinity for Nugent. They both engage in childish vulgarity. They are both consumed with hatred for their fellow Americans. Racism is the prime motivating factor for both of them. They are both draft dodgers who now pretend to revere the military. And they have both publicly boasted about their misogynistic affairs and sexual assaults that have included women and girls.

The picture of Trump and Nugent together is a fitting finale for his repugnant campaign. They are the embodiment of the worst of the right’s bigotry and hateful propensity for violence. It sums up the GOP’s devolution into a party dedicated to division and hostility. And on Tuesday Americans will have the chance to reject all of that and turn the nation away from the neo-fascism that Trump represents. Don’t blow it, America.

UPDATE: Living down to expectations, Nugent managed to offend at the Trump rally. Repeatedly referring to Michiganders as “shitkickers,” Nugent grabbed his crotch and said “I’ve got your blue state right here.” Later he asked the crowd if he should play his stale hit “Wang Dang Poon Tang” for the children?