There is a surprisingly effective effort in progress to inform the Electoral College about the Russian hacking of the election. Ever since the Washington Post reported the CIA’s conclusion that “Russia intervened in the 2016 election to help Donald Trump win the presidency,” electors have been reconsidering how they might vote on December 19. It’s taken on a life of its own online with the hashtag #InformTheElectors 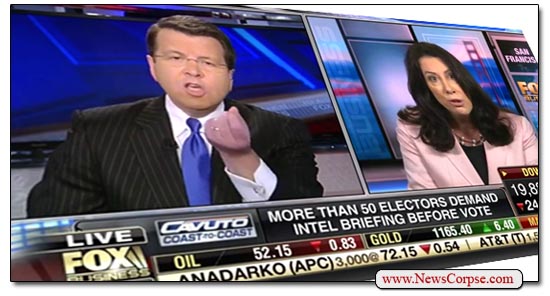 One of those electors is Christine Pelosi, a long time activist and daughter of the Democratic leader in House, Nancy Pelosi. She appeared Tuesday on Fox News with Neil Cavuto who berated her for seeking information. Right from the start Cavuto maligned the CIA with the GOP talking point that they are the same people who said Saddam Hussein had weapons of mass destruction. Pelosi corrected him saying that it was the Bush/Cheney administration who pushed that, not the CIA.

Cavuto continued his harangue in an attempt to paint Pelosi as a partisan who is trying to hurt Donald Trump. She repeatedly informs him that all she is asking is for the information to be made available so the electors can make an informed decision. Cavuto seemed oblivious to her response and shot back:

Cavuto: “You are trying to get electors who are heretofore bound to the Republican candidate in Republican states to switch their allegiance.”

Pelosi: “Don’t put words in my mouth. You owe it to the American people to let me tell the truth and to not lie about what I just said.”

Not satisfied, Cavuto hauled off again with the same question, all the while talking over Pelosi and not allowing her to give a complete answer:

Cavuto: “Do you want them to switch their votes? Yes or no.”

Cavuto had no sympathy for the danger that Pelosi has encountered specifically due to people like him lying about her. He even tried to waive it off with talk about “threats” that he’s received. As if that made her suffering alright.

Throughout the onslaught, Pelosi more than held her own. She continued to drive home the point that she was not prejudging the contents of the intelligence data. It would be up to the electors to decide for themselves whether it was significant enough to change their vote. But she was adamant that the information be available. And when he couldn’t succeed in getting to Pelosi to cower to his bullying, he resorted to a hackneyed bit of fact-mangling about the election results:

Cavuto: “When you include all the candidates, more people voted against Hillary Clinton than voted for her.”

That’s true. However, when you include all the candidates, even more people voted against Trump than voted for him or against Clinton. So what exactly was his point? That’s the sort of dishonest spin that is typical of Cavuto and Fox News. And you can bet that Cavuto won’t be inviting Pelosi back on in the near future.

Watch parts 1 and 2 of the Fox News segments here: