Three weeks. While it may seem like a year, that’s all that’s gone by since Donald Trump was sworn in as President of the United States of America. And the chaos that has characterized his short reign is unprecedented. Trump entered the White House with the worst approval rating of any president on record. And it has actually gone down from there. 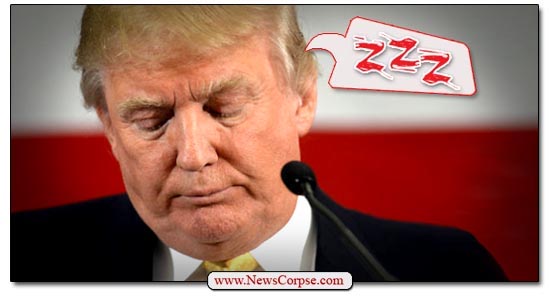 So reporting from Politico that Trump is “vexed” by the challenges and scale of government doesn’t come as a surprise. He has shown little interest in transitioning from being a private businessman to a national leader. His absence from security briefings, and his fixation on image and polling, reflect a man who isn’t taking his job seriously. However, Politico’s opening paragraph perfectly describes this cognitive disconnect:

“Being president is harder than Donald Trump thought, according to aides and allies who say that he’s growing increasingly frustrated with the challenges of running the massive federal bureaucracy.”

Politico’s sources report that Trump has been surprised and frustrated that running government is not at all like running his business. He doesn’t seem to understand the role of the co-equal branches of government and is angered that he can’t simply do as he pleases. And who could blame him? For all the rhetoric from conservatives, government is not remotely similar to business and cannot be run like one.

To appreciate why Trump is having so much difficulty adapting, we need to look at his past. Donald Trump was born into wealth. All his life he has been able to do whatever he wanted, whenever he wanted. If he felt like jetting to Paris for the weekend, he could. If he was invited to watch the Super Bowl with wealthy friends, no problem. From a business perspective, he could launch a hotel project in Manhattan, or a golf course in Dubai, at will.

Conversely, as president Trump is bound to his office. His duties are not chosen, but thrust upon him. What ever legislation or crisis that lands on his desk demands his attention. And in many cases, those things may not hold any interest for him. Too bad. That’s the job.

What’s more, the trappings of the presidency for him must be stifling. He cannot simply get up and go somewhere when he feels like it. Every presidential outing requires planning, security, and logistics at the destination. There are some places he can’t go at all due to these requirements. And the living arrangements are sub-par from his perspective. The White House is a step down from his gold-encrusted Manhattan penthouse. He can’t travel on his beloved, luxurious private jet.

Given the demands of the job, and the restrictions on his personal freedom, for Trump being president is like prison. And the strains of this “incarceration” are showing in the poorly executed actions he’s taken, and the low morale and in-fighting among his staff. Not to mention his barking at the press and attacks on judges. These cracks in the administration are exposed in Politico’s reporting. Take for example, these excerpts:

“The president and his allies believe career NSC staff assigned from other agencies are out to get them.” […]

“[H]e has also sought refuge from the pressures of the presidency, frequently calling up old friends and sounding them out about golf. […]”

“The interviews paint a picture of a powder-keg of a workplace where job duties are unclear, morale among some is low, factionalism is rampant and exhaustion is running high.”

Considering Trump’s impulsive and erratic behavior, might he just decide that the sacrifices aren’t worth it and resign? Perhaps that’s just wishful thinking. But there are signals from Trump and his closest associates that suggest that he’s anxious to escape and return to his prior life of leisure. Why wouldn’t he want to spend his golden years in his golden palace?

4 thoughts on “Is Donald Trump Already Sick Of A Job He Never Really Wanted?”