Three months ago Donald Trump managed to corral more electoral college votes than his opponent, Hillary Clinton. He also lost the popular vote by nearly three million votes. And he’s still whining about it. His obsession with the historically unprecedented popular vote deficit has glommed onto his psyche like a fetid leech that won’t let go. And despite having the burdens of the office weighing on him, he’s still yowling about it. 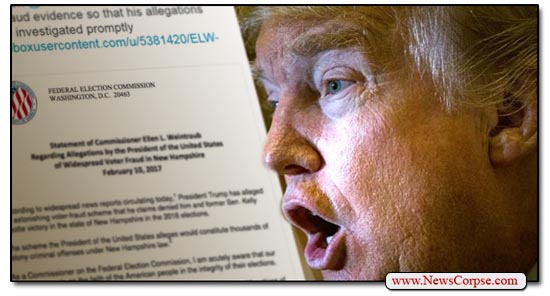 Trump’s reaction to the popular vote loss was to assert that 3-5 million people voted illegally in November. That blatantly false contrivance has been thoroughly debunked. PolitiFact rated it a “Pants-On-Fire” lie months ago. Repeated requests for documentation of his claim have been ignored, but for a promise to launch a federal investigation. That inquiry, Trump said last week, would be led by Vice-President Mike Pence. Much like the claim of voter fraud itself, there is no evidence of any inquiry. Even the Republican majority leader in the Senate, Mitch McConnell, is skeptical. On CNN he said that “I don’t think we ought to spend any federal money investigating that.”

Which brings us to Trump’s Friday meeting with a group of senators and former New Hampshire senator, Kelly Ayotte. Proving that he’s still controlled by his image-conscious ego, Trump offered a new version of the voter fraud lie. According to Politico, Trump blamed his loss of the state of New Hampshire on “thousands” of people who were ‘brought in on buses’ from neighboring Massachusetts to ‘illegally’ vote.” Once again, he refused to provide any documentation of the claim.

This time, however, the allegation was noticed the Federal Elections Commission (FEC). Ellen Weintraub, a George W. Bush appointee to the commission, made a public request for Trump to fess up. Her letter said in part that:

“President Trump has alleged an astonishing voter-fraud scheme [that] would constitute thousands of felony criminal offenses. [And that] democracy rests on the faith of the American people in the integrity of their elections. […] I therefore call upon President Trump to immediately share his evidence with the public and with the appropriate law-enforcement authorities so that his allegations may be investigated promptly and thoroughly.”

Trump’s allegations of voter fraud are problematic for more than their dishonesty. It is irresponsible to foment distrust of the election process in ways that are demonstrably false. There are indeed flaws in the process of voting. They include gerrymandered districts, campaign financing, and voter suppression through registration obstacles. But every credible study done on voter fraud shows that it occurs so infrequently as to be irrelevant.

Nevertheless, Trump and his sycophants in the White House and the press continue to disseminate lies. It is part of a concerted strategy to deceive and confuse the public. They want people to doubt democracy. Just like they want people to doubt academia, science, the media, and government in general. By sowing suspicion of society’s institutions, the Trump regime aims to exert ever greater control of a frightened populace. He must not be allowed to succeed.