The American people are turning out in droves to protest the fumbling new administration of Donald Trump. Town hall meetings across the country have been packed with citizens expressing their outrage. The topics of concern cover everything from Trump’s Muslim ban to Congress’ do-nothing stance on Trump’s ties to Vladimir Putin and election tampering. 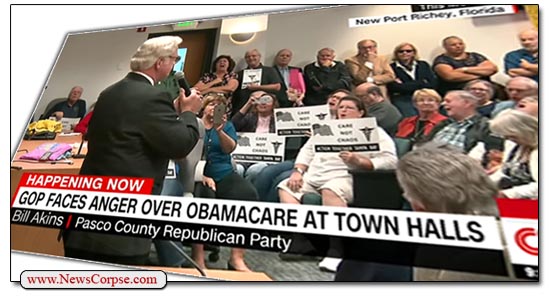 Citizens fed up with Trump’s incompetence and right-wing crackpottery are taking a page from the defunct Tea Party’s playbook. They are showing up at town halls and making certain that their voices are heard. The strategy is being advocated by independent grassroots organizers that have come to be known as the “Indivisible Movement”

The effects of the strategy are being felt by both Democrats and Republicans nationwide. Jason Chaffetz, the chair of the House Oversight Committee, got a taste of it this week. Constituents upset with his failure to investigate any of the myriad scandals associated with Trump showed up in force. And that was in bright red Utah.

On Saturday, a town hall in Florida for GOP Rep. Gus Bilirakis erupted into chaos when a Republican Party official rose to speak. Bill Akins, secretary of the Pasco County, Florida, Republican Executive Committee, ventured into territory not traveled since the heyday of the Tea Party. Seeking to defend the GOP’s efforts to repeal ObamaCare, he said:

“Here’s the problems I have with the Affordable Care Act. Number one, there is a provision in there that anyone over the age of 74 has to go before what is effectively a death panel.”

With that the room exploded in a chorus of boos, with many shouting that he was a “liar” and “wrong.” Undeterred, Akins stood at the front of the hall insisting that he was right and insulting the assembled citizens:

For the record, the death panel myth was started by rightist conspiracy kook Betsy McCaughey, and made famous by Sarah Palin. There was never any truth to the claim. In 2009 PolitiFact crowned the Lie of the Year. But that didn’t stop Akins from attempting to resurrect it from its well deserved burial.

It makes perfect sense that this notorious falsehood would reemerge in the Era of Trump. This is time a that is ripe for lies, deception, and disinformation. It’s a time for “alternative facts” and “fake news.” It’s Donald Trump’s contribution to public discourse. And he gets welcome support from Fox News and other conservative media that eagerly regurgitate the very same lies – or as they should properly be known – Trumpisms.