What may be the most scandalous saga to date from the nascent Trump administration continues to unfold in shocking ways. The latest revelation comes from Fox News. That’s right, Fox News! Correspondent John Roberts reported that his investigation of fired National Security Advisor, Gen. Michael Flynn, has uncovered an account of events that contradicts President Donald Trump (video below). 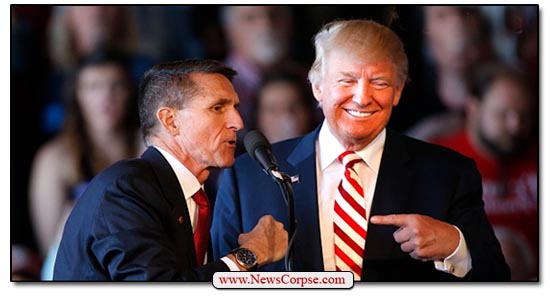 Trump began by denying that he knew about Flynn’s contacts with the Russian ambassador. When that story failed he denied having any details of the substance of those talks. This report reveals that Trump not only knew that the talks took place, but what they talked about.

In Thursday’s press conference Trump addressed the Flynn firing specifically. He said that he didn’t think Flynn had done anything wrong by talking to the Russians. In fact, he said he would have directed Flynn to do so. That’s an odd statement because it begs the question: Why didn’t he give that direction?

However, Trump also clarified the reason he fired Flynn saying that “I fired him because of what he said to Mike Pence.” So Trump fired Flynn because Flynn had not told Pence that he discussed sanctions with the Russians. But Fox’s report reveals that Trump also knew about Flynn’s conversations, including the sanctions, but Trump didn’t tell Pence either. So both Trump and Flynn withheld the same information from Pence, but Trump fired Flynn for it.

None of this makes any sense. Trump doesn’t think Flynn’s conversations with the Russians were wrong. The only thing that was wrong, according to Trump, was not telling Pence. But Trump didn’t tell Pence either. So was Trump wrong? And if not, then why was Flynn fired?

Are you confused yet? Then you’re normal. Clearly this entire affair was a disaster. There should never have been any talks during the campaign between Trump’s people and a hostile foreign government. We have just one president at a time. Consequently, Trump’s scrambling to find excuses for all of this just churns out more bullshit as he goes along.

The new revelations from Fox News prove that Trump’s story is an ever-changing fiction. And the fact that the proof is coming from Fox is significant in and of itself. When the nation finally learns what has been going on between Trump and Russia, there is certain to be more shocking details revealed. Perhaps they will explain Trump’s constant defense of Vladimir Putin and his reluctance to ever criticize the Russian dictator. And maybe we’ll also find out just how intertwined Putin was with Trump’s campaign.

.@johnrobertsFox: @POTUS was in fact fully briefed on the content of those conversations that Gen. Flynn had with the Russian ambassador. pic.twitter.com/I70FlxuYCl

3 thoughts on “FOX NEWS (!?!) Reveals What Trump Knew About Flynn’s Talks With The Russians”