It has been a little more than a month since the mid-term elections. Voters, fueled by anger and dissatisfaction with the progress of the economic recovery, drove the majority Democrats from power and placed a sort of blind faith in the Republicans who put us into this stubborn recession in the first place. And even though the change in party control has not yet taken place there is a noticeable change in the nation’s political mood. Have you seen it? 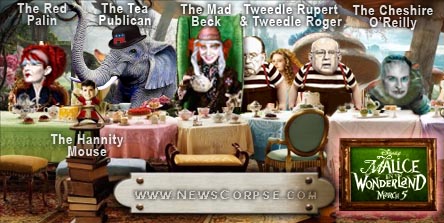 Prior to the election the Tea Party was an omnipresent factor in campaigns, rallies, and in the media. GOP candidates clung desperately to Tea Party support groups. Self-appointed leaders like Sarah Palin and Glenn Beck gathered frenzied Tea Partiers to theaters and malls across the country. And Fox News was a virtual Tea Party telethon where you couldn’t go five minutes without hearing another representative calling Democrats socialists and President Obama a traitor.

So where are they now? The fact that the presence of the town howlers was so ubiquitous a few weeks ago makes their sudden disappearance all the more curious. It’s as if the tsunami rolled onto the beaches causing profound havoc and fear, and then just as quickly receded back into the ocean leaving waste and destruction in its wake.

Most striking is the change in guest bookings on Fox News. Pre-election it was nearly impossible to escape the grimacing scowls of Fox-sponsored Tea Baggers. At times it seemed as if they were co-hosting with Fox & Friends, Neil Cavuto, Megyn Kelly, Sean Hannity, and others. There was a permanent tea stain on the network that had even branded the party as its own in its promos (recall the “FNC Tax Day Tea Parties”).

Post-election the programming is decidedly different. The Tea Party soap opera has been canceled after just a single season. The only public spokespeople for the formerly hyped movement are GOP operatives and the freshman class of congressional Republicans. Every now and then a former cast member will show up in a desperate bid for relevancy, not unlike one of the Brady kids or Joey from Friends. More often than not their appearance is limited to responding to some embarrassing utterance such as Tea Party Nation founder Judson Phillips, who was brought before the bar to respond to his absurdly discriminatory and elitist proposal that only property owners should be allowed to vote.

And speaking of elitist, that personality trait was a featured target of derision from within the ranks of the Tea Party. They frequently focused their animus on politicians and pundits whom they regarded as out of touch or overly bound to positions of power and influence. Today, however, there is nary a squeak of objection to the same rich and powerful in the public sphere advocating for tax policies that make them richer and more powerful. At the same time the benefits flowing to this self-serving privileged class would balloon the deficit by hundreds of billions of dollars. That’s the same deficit that had previously made Tea Partiers quiver with outrage.

So has the Tea Party’s indignation dissipated or have they been shunted to the sidelines now that their usefulness has waned? The Republican Party relied on the motivational feverishness of Tea Baggers to realize their gains at the polls. They were beneficiaries of millions of dollars in contributions and countless hours of organizational savvy from well-heeled lobbyists like FreedomWorks and Americans for Prosperity. Their names were on the lips of partisan propagandists like Karl Rove and Newt Gingrich whenever they were within earshot of a microphone. But now they would be lucky to be raised as an afterthought, and the money spigot has been turned down, if not shut off entirely.

To be sure, the Tea Party was always a pseudo-movement whose profile far exceeded their actual girth. Poll after poll revealed that their numbers never justified the attention they enjoyed. But their utility to the ambitions of Republicans brought them abundant recognition driven by the capacity of Fox News to plaster their mugs on TV 24/7. That utility having been exhausted, the Tea Party appears to be over.

The so-called Tea Party candidates are distancing themselves from their fan base. They are taking positions that would once have been castigated as treason. For instance, their infamous aversion to earmarks has been replaced with a more pragmatic sounding advocacy of producing results for the folks back home. Even Tea Party favorites like Michelle Bachmann (chair of the House Tea Party Caucus) have embraced a new strategy that calls for “redefining” the term earmark. And isn’t it convenient that the new definition passes their test for supporting what they previously promised to oppose?

Furthermore, the cacophonous call of Tea Partiers as rebels and outsiders has been dimmed to a whisper. Many of the stalwart amongst them, including such luminaries as Rand Paul and Pat Toomey, have announced that their congressional offices will be run by former corporate lobbyists – the most inside of the insider contingent.

It is undeniable that the Tea Party has been abandoned by their heroes. And this forsaking is possible because the usurpers know what the the polls have shown all all along. There will be little consequence for their betrayal because the Tea Party is an impotent facade.

The question now is whether the former Tea Bagging tools will raise any kind of a ruckus at having been taken advantage of so brazenly. Is there really any fight in that crowd? Are they nothing without their AstroTurf benefactors? Do they resent having their “movement” hijacked by entrenched Washington insiders? And do they really even care about the principles they professed to hold? Will they reject the elitists who advocate for the wealthy and privileged at the expense of average Americans? Will they lobby for reducing deficits even if it means the upper/ruling class have to share in the nation’s suffering for a change?

Time will tell, but I’m not optimistic that many of the Tea enthusiasts can be wrested from their perch. Most will continue to fawn over Palin and Beck. And those whose eyes are actually opened will be ostracized and exiled from the tribe. Having imbibed the tea, it will be difficult to break the addiction. It is a sort of heroin/Kool Aid cocktail with a mighty grip on its victims. Without the unrestricted access to Fox News they they will fade away into the obscurity that almost every other third party has sunk into. And most likely, no one will notice their passing. As for Fox, they will report that we have always been at war with Oceana.