For the past several years at this time, Fox News has made certain that Christmas was the time of year that all good Americans shun everyone who isn’t Christian. From Sarah Palin to Glenn Beck to Neil Cavuto, the call to reject such inclusive greetings as “Happy Holidays” is heard throughout the Fox News village. Bill O’Reilly, as usual, is at the forefront of the battle. And you know that he understands the meaning of Christmas because he articulates it so well:

Heartwarming, isn’t it? O’Reilly’s gratitude for the birth of his savior isn’t due to the gift of eternal life. It’s for the prospect of higher profits. His Jesus would have invited the moneychangers into the temple.

I’m sure that O’Reilly’s wrath will be suitably deployed when he hears that Fox News has joined the Pagan hordes who insult Jesus by taking Christ out of Christmas. During today’s broadcast of Fox & Friends they brazenly wished their viewers a happy holiday. 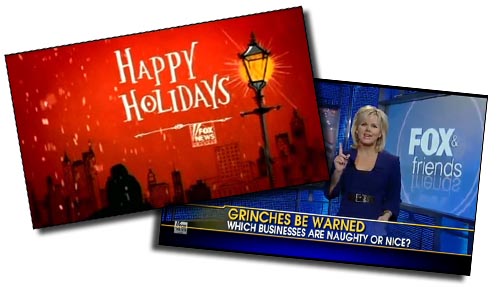 It was just last week that Fox & Friends hostess Gretchen Carlson berated the city of Tulsa, Oklahoma for changing the name of their Christmas parade to the Holiday Parade of Lights. And Fox & Friends recently featured a story about Grinch Alert, a web site from the First Baptist Church of Dallas that tracks businesses who say “Holiday” instead of “Christmas.” You can go to the Grinch Alert site now and enter Fox News as “Naughty” for perpetuating the evil of a “holiday” celebration.

For the record, Fox doesn’t get credit for initiating the war on Christmas. In 1921 Henry Ford published a virulently anti-Semitic tract titled “The International Jew” in which he wrote…

“The whole record of the Jewish opposition to Christmas, Easter and other Christian festivals, and their opposition to certain patriotic songs, shows the venom and directness of [their] attack…And it has become pretty general. Last Christmas most people had a hard time finding Christmas cards that indicated in any way that Christmas commemorated Someone’s Birth.”

Sound familiar? And the right-wingers on Fox and elsewhere owe a debt to the John Birch Society for waging this seasonal war and injecting the scent of red-baiting into it for good measure. Their 1959 pamphlet titled “There Goes Christmas?!” warned that…

“One of the techniques now being applied by the Reds to weaken the pillar of religion in our country is the drive to take Christ out of Christmas – to denude the event of its religious meaning.”

And if that doesn’t bring the warmth of the season home, I don’t know what to say. Except Happy Holidays.

[Update:] Once again Rupert Murdoch sent a memo to all employees wishing them a happy “holiday.” Why does he hate Jesus?

6 thoughts on “Fox News Escalates The War On Christmas”