The political satire scene took a couple of body blows when Jon Stewart left The Daily Show and Stephen Colbert gave up his Colbert Report. The slack was taken up ably by John Oliver, Samantha Bee, and a resurgent Saturday Night Live. But a leading light in this arena has been Late Night with Seth Meyers. 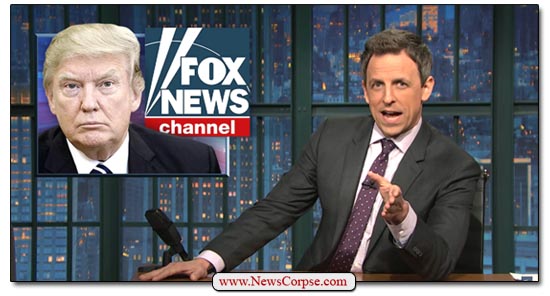 This week Meyers delivered one of the best take downs of Fox News since Jon Stewart left the stage. In this segment Meyers begins by noting that the sexual harassment allegations against Bill O’Reilly offer an example of Fox News’ “symbiotic relationship” with Donald Trump. And, yes, Meyers makes the connection.

However, the segment goes into much greater detail on how Fox News is a network in service of propaganda. Meyers spells it out in plain language saying that “They [Fox] give him [Trump] glowing, unquestioning coverage, and in return he gives them unparalleled access.” That’s it in a nutshell. But Meyers isn’t through. He manages to put together a variety of samples of Fox’s sycophantic sucking up to Trump. “Fox News,” he said, “is basically the closest thing we have to state TV” And furthermore:

“This is the network that the President relies on for information? A network with an archaic culture of sexual harassment, fear, and intimidation, that also serves – with a few exceptions – as a propaganda arm.”

Meyers points out how Trump has been promoting Fox News programs on his Twitter feed. “Instead of a bible,” Meyers says, “Trump should have been sworn in on a TV Guide.” And Fox News happily reciprocates by promoting Trump’s promotions of Fox. The clip with Fox and Friends co-host Steve Doocy is worth the price of admission by itself.

The whole piece is a brilliant combination of humor and perceptive media analysis. This clip can be saved and replayed for both its entertainment value and its uncompromising honesty and insight.

One thought on “Seth Meyers: Fox News Is Basically The Closest Thing We Have To State TV”