Monday afternoon the Senate judiciary Committee met for hearings on Donald Trump’s connections to Russia during his campaign and into his presidency. The star attraction was former Acting Attorney General Sally Yates, whom Trump fired under suspicious circumstances. Yates had warned him that his then-National Security Advisor, Gen. Michael Flynn, might have been compromised by Russian operatives. So, of course Trump fired her, but didn’t fire Flynn until three weeks later. 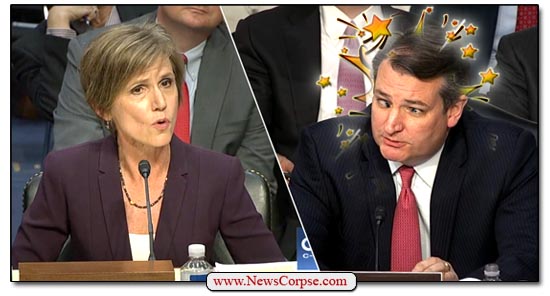 The hearing was predictably partisan with Democrats sticking to the subject at hand, while Republicans tried to deflect to everything from alleged leaks, to Hillary Clinton’s email server. However, the most peculiar moments came during questioning by Sen. Ted Cruz (surprise). Although Cruz has long boasted of his debating skills, his exchange with Yates did not go well for him. Here is a condensed transcript of what occurred. [Note: the full video is posted below]

At that point Cruz asked Yates if she was familiar with a statute that he said was the binding authority for Trump’s executive order. He said that her refusal to comply with it was the reason for her termination. Then he read the statute as if declaring victory over his foe. But Yates responded in a manner that ought to have shut him up:

Cruz: The statute says, quote, ‘Whenever the president finds that the entry of any alien or of any class of aliens into the United States would be detrimental to the interests of the United States, he may by proclamation, and for such period as he shall deem necessary, suspend the entry of all aliens or any class of aliens as immigrants or non-immigrants, or impose on the entry of aliens any restrictions he may deem appropriate.’ Would you agree that that is broad statutory authorization?
Yates: I would, and I am familiar with that. And I’m also familiar with an additional provision of the INA that says, ‘No person shall receive preference or be discriminated against in issuance of a visa because of race, nationality, or place of birth.’

Yates went on to point out that the section of law she quoted was promulgated after the statute that Cruz cited. It therefore took precedence. Cruz appeared not to be aware of any of that. So in a desperate effort to divert attention from his humiliation, he sought to baselessly accuse Yates of partisanship:

Yates: I’m not. But I’m also not aware of a situation where the office of legal counsel was advised not to tell the Attorney General about it until after it was over.

Immediately after this exchange Cruz left the hearing room with his tail between his legs. He didn’t bother waiting until the hearing was over or listening to any of the other testimony. Clearly he was ashamed and unable to face his colleagues or the press. So he beat a hasty retreat. He might have been better off had he not shown up. And the same can be said of the rest of the GOP inquisitionists on the panel.