Three months into Donald Trump’s administration there is more cause than ever for critical analysis of Washington politics. But much of the press is having trouble countering Trump’s “Reality TV” dramatization of news. They attempt to achieve a false balance by presenting opposing views, even if one side is truthful and the other is lying. 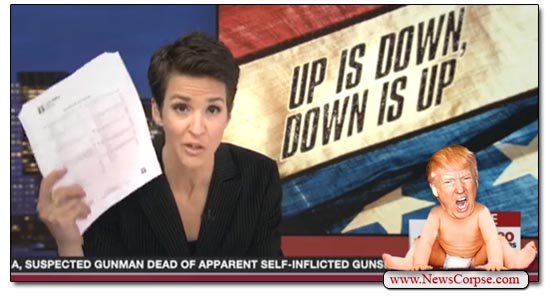 Having a president who’s suspected of colluding with Russians to steal an election is hardly the time to go soft. It is not the time to appease those in power or pander to wingnuts who will never tune in anyway. Yet that’s exactly the direction that MSNBC appears to heading.

These roster changes are especially puzzling at this time. MSNBC has built a brand that appeals to a more progressive audience. Despite having a former Republican anchoring three hours in the morning (Joe Scarborough), and a generally straight news profile during the day, their prime time lineup leans openly to the left. Chis Hayes, Rachel Maddow, and Laurence O’Donnell are not shy about expressing their liberal opinions.

More importantly, that programming slant has paid off handsomely for MSNBC. They are enjoying their highest ratings in years. Maddow is actually beating her competition on Fox News in the key advertising demographic of 25-54 year olds. Not too long ago Fox News was considered unbeatable. But now Adweek’s TVNewser reports that:

“The network also continues to post more year-over-year prime time audience growth than both Fox News and CNN: +82 percent in total viewers and +61 percent in the prime time demo versus April 2016.”

It’s a surprising and inspiring success story. Any network would be turning cartwheels and striving to replicate that success across its dayparts. So why is MSNBC going out of their way to bolster a winning lineup with right-wing losers? None of the new “talent” has demonstrated any appeal to MSNBC’s audience. Van Susteren, in fact, is an obvious hole in the schedule, dipping noticeably between her lead-in and lead-out. And the viewers that might be interested in these new faces are genetically averse to ever tuning in to the radical socialists at MSNBC. Why should they when they can get all the wingnuttery they desire on Fox News? And if it’s caterwauling debates that they want, CNN already has the market cornered on that.

There is no shortage of liberals who could be brought into the MSNBC family. Joy Reid already has a Saturday morning show that gets more viewers than many weekday shows on CNN and Fox. They could have moved her into the time slot they gave to Van Susteren or Wallace. Even Keith Olbermann was in talks to return to MSNBC. His last stint with the network was the last time they challenged Fox. But according to Olbermann, they told him he would have to refrain from his “fiery” commentaries. That was an untenable restraint, so he walked.

It’s hard to know what the suits at MSNBC are thinking. There is clearly an appetite for news commentary that counters the powerful elite in Washington. It’s a programming niche that is unfilled elsewhere. Plus, it’s a necessary defense against the dangerously erratic Trump administration’s assault on America. Where else can we go to get reality-based news about climate change? Who else is covering voter suppression and gerrymandering? Which other network is allotting time to racial and gender discrimination? And what about our President’s potentially treasonous connections to unsavory figures in Russia?

Fox News deliberately downplays any unflattering news about Trump. CNN reports it, but puts on crackpots who disseminate absurd justifications. That leaves MSNBC as the one network that honestly covers Trump’s dark side. For that reason alone they should not be adding to the pro-Trump voices in the media. We already have plenty of that and far too little truthful common sense and compassion.

UPDATE: There are rumors that MSNBC may not renew the contract of Lawrence O’Donnell despite the fact that his ratings are at a record high. He is beating CNN, and challenging Fox News. This would be good time to let MSNBC know that we demand they keep O’Donnell and stop sucking up to the right. You can call them at 212-664-4444 and email them at letters@msnbc.com.

7 thoughts on “WTF is Going On at MSNBC? Recent Hires Have a Distinctly Fox News Flavor”