The conservative media machine is marshaling its forces to launch an all-out assault on journalists and pundits who fail to kowtow to Donald Trump. It’s a reactionary campaign in response to the success of the honest reporting by Rachel Maddow and other progressive voices. In recent weeks, Maddow has taken the lead in primetime programs from the previous ratings chart topper, Fox News. The rest of the MSNBC lineup has seen a similar surge in popularity. This massive shift in dominance is mainly driven by the strength of their straightforward reporting about Trump and Russia. 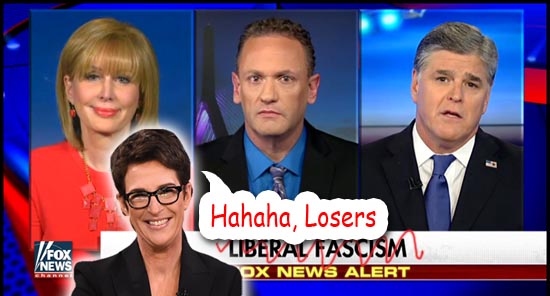 Consequently, those on the right have begun shaking in their boots as their hammer lock on the ratings is broken. The last year has been dreadful for Fox News. Their CEO, Roger Ailes, and top star, Bill O’Reilly, were both terminated in disgrace due to sexual harassment scandals. They are being sued for gender and racial discrimination. And the New York Attorney General is investigating the network for securities violations.

The latest Fox News host to suffer as a result of his own sleazy misconduct is Sean Hannity. He has been pushing a widely debunked conspiracy theory about Seth Rich, a murdered Democratic National Committee staffer. Despite the absence of any facts, and pleas from the family to back off, Hannity has persisted. Even Fox News took down their report on the subject.

The determination of Hannity to spread this phony story has prompted Media Matters to post a list of his advertisers. The purpose was not to start a consumer boycott, but to alert the advertisers to what sort of program they were sponsoring. Then they could decide if it was in their best interest to continue.

Apparently, the desperate losers on the right were not pleased. So they have initiated their own campaign against Maddow and others whom they now refer to as “liberal fascists.” According to Politico:

“The groups plan to pressure advertisers for left-leaning shows like Maddow’s on MSNBC, in hopes that the sponsors will pull their ads. They charge that Maddow and other liberal hosts are peddling conspiracy theories and smearing conservatives with personal attacks.”

“They cited reports of alleged coordination between President Donald Trump’s campaign and Russian agents as an example of the smears.”

Notice what they’ve chosen as their example of a conspiracy theory. It’s a fact-based report that is affirmed by seventeen U.S. government intelligence agencies. No independent observer disputes that the Russians interfered with the 2016 presidential election to help Trump and hurt Hillary Clinton. And the allegations of collusion are based on numerous reports connecting Trump and his associates with Russian operatives. Many of those connections were hidden by the participants until disclosed by persistent reporters.

The groups involved in the attack on Maddow et al are well known in the conservative hack community. The Media Research Center has a long history of smearing liberals in the press. They favor common right-wing talking points and exploiting lefty “villains” like George Soros. The Media Equality Project is a new entity headed by two former conservative radio talkers, Melanie Morgan and Brain Maloney. They both appeared on Hannity’s program Tuesday night to defend his campaign of slander and promote their anti-Maddow efforts. [Video below]

So far there is no discernible impact from the wingnut brigades. That may be because Maddow’s reporting is wrapped up tighter in facts than anything produced by Hannity and his ilk. The Media Equalizer’s told Hannity last night that they are getting millions of people supporting them. However, their Facebook page has fewer than 5,000 followers and they have even less on Twitter.

But let’s not get cocky. Rachel Maddow, Chris Hayes, and Lawrence O’Donnell need the continued support of Americans who appreciate honest news analysis. MSNBC still hasn’t signed a contract renewal for O’Donnell. Meanwhile they have hired or promoted the likes of Greta Van Susteren, Hugh Hewitt, and George Will.

The right has a built in advantage with the media because every media owner is a giant corporation whose interests are not aligned with the average American. We have to make sure they know that their financial well being is dependent on serving the public interest. In the meantime, it’s satisfying to see Hannity and his trolls floundering as they try to muddy the waters with their self-serving lies. But we can only expect that to make them more aggressive and repulsive. Stay tuned and stay strong.

Urgent (and hilarious) Update: Hannity is now so desperate that he’s threatening to go after Stephen Colbert. And that’s something Colbert — would absolutely LOVE.

Hannity tonight announces that if advertisers don't stop leaving his show, he will be aggressively attacking Colbert's advertisers.

4 thoughts on “Uh-Oh: Rachel Maddow is Under Attack by Sean Hannity and Right-Wing Propaganda Groups”