Fox News (aka Donald Trump’s State-Run Propaganda Network) is at it again. The Trump-fluffing cable “news” distortion outfit is running interference on behalf of the treasonous White House mole they planted in the Oval Office. As the evidence of Trump’s collusion with Russian operatives mounts, Fox News ramps up their pitifully sycophantic defense squads. 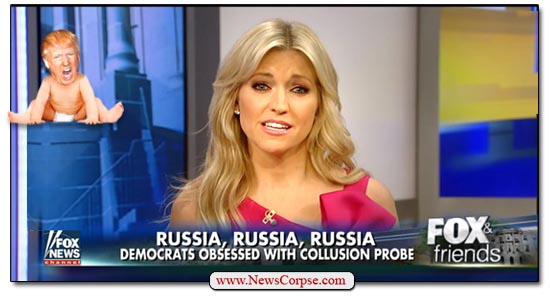 The falsehood factory at Fox has reassembled what they call their panel of “Security Moms.” In reality they are four pre-selected pro-Trump mouthpieces who shamelessly defend the President’s most heinous behavior. Last March they were brought in to try to hold back the flood of bad news regarding Trump and Russia. They failed so spectacularly that Fox brought them back Tuesday for an encore (video below).

In the latest episode of Security Moms, host Ainsley Earhardt dived straight into the controversy with a pointedly leading question:

“Well, the Democrats can’t stop talking about Russia, but is this really the issue that American families care most about? […] Do you care about Russia, and if not — I know you’re gonna say no.”

So Earhardt interrupted her own question to admit that she already knew the answers her mom panel would give. And the question itself was dripping with bias. Democrats aren’t the only ones talking about Russia. And polls show that significant majorities of voters care very much about the issue. Even the most recent Fox News poll. But that didn’t stop the moms from spinning furiously, just as they were recruited to do. For example:

Security Mom 1: All Americans care about foreign bodies hacking into our systems or tampering with our elections, but none of us think that that’s happened in this case.
Security Mom 2: And after seven months we still have no credible evidence, so I think it’s time to move on. What we’re experiencing is that it’s too much and unbalanced. […] Instead of Democrats, and most in the mainstream media, acting like adults and coming to the table with real solutions, they’re behaving like crazed animals.
Security Mom 3: This narrative the mainstream media is talking about – mentioning our President of the United States – it just needs to stop.
Security Mom 4: A lot of it, I really think, has to do with with left over election bad feelings. And this is kind of the catalyst going forward.

So these ladies are entirely oblivious to the mountains of evidence connecting Trump and his associates to Russian operatives. They believe that all of it should be ignored and the country should move on blissfully unaware of potential traitors in the White House. After all, they’re convinced that it’s just the ravings of crazed Democrats as they plead “it just needs to stop.”

Security Mom 3 also made an astonishingly incoherent and unrelated claim. She asserted that Fox News was the only station that had continuing coverage of the Manchester terrorist attack. To which Earhardt mustered her most sincere Stepford attitude to reply “We were. You’re right about that.” This is a demonstration of something far worse than bias. It’s delusional. But it’s totally aligned to the themes that Fox News dispenses every day. Their perverse world view was summed up nicely in this comment that combines diversion with Fox’s taste for victimization:

Security Mom 1: Most Americans believe that this is the typical left reaction. They lost the election. They’re a bunch of big babies. They’re crying about it. And now this is a big distraction. “We lost the election, but now we’re gonna distract you with this Russian collusion nonsense. And on top of that we’re gonna try to take Trump down by all means necessary, somewhat, probably, illegal.

Oh the horror. Our President is being attacked by factual evidence of his own criminality. And the most powerful man on Earth is defenseless against the “big babies” of the left. The enraged mom never bothered to say what illegal means were being employed to take Trump down. But then, why would she? If Fox’s viewers were interested in facts they would be clamoring for impeachment hearings like the rest of the country.