You have to cut Fox News a little slack. If they made public corrections for every mistake, or outright lie, they’d have no time left for any new lies. Consequently, when they do offer a correction it’s deserves some attention, if not appreciation. 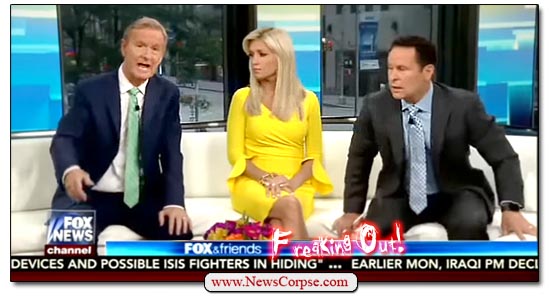 This rare mea culpa occurred Tuesday morning on Fox and Friends (video below). Steve Doocy took a moment to address some comments made on the program the day before. They were discussing a report by The Hill that provided some details on memos written by former FBI director James Comey about his meetings with Donald Trump. The report stated that some of the memos were retroactively designated as confidential or secret. But Fox and Friends completely misrepresented the story. Correspondent Jillian Mele described it as:

The truth is that none of the memos were “Top Secret.” As noted above, some were classified at lower levels. But nowhere in the story did it say that any of the classified data was made public. Therefore, there was no security risk. On Tuesday morning, Doocy made this wholly inadequate correction on the air:

“Yesterday on this program, we aired and tweeted this story saying former FBI Director James Comey leaked memos containing top secret information. We were mistaken in that. According to the report, half of the memos contain information classified at the secret or confidential, not top-secret, level. Markings of the documents in which Mr. Comey leaked are, at this point, unclear. Just wanted to straighten that out.”

First of all, Comey didn’t “leak” anything. That’s a deliberately incendiary and overtly biased term. Comey merely made his own personal recollections to public. That’s something that is done in every political memoir ever published.

Secondly, there is confirmation from the Columbia professor who gave the memos to the press that nothing classified was revealed. So Doocy’s attempt to falsely inject malfeasance into the story is just plain dishonest. Clearly, he had no intention of straightening anything out.

While Doocy’s remarks only partially corrected the record, there’s another deceiver who hasn’t even gone that far. Donald Trump retweeted the phony segment from Fox News. And his added commentary made it even worse, saying “Comey leaked CLASSIFIED INFORMATION to the media. That is so illegal!” Trump tweeted that unfounded opinion just minutes after it was conveniently broadcast on Fox News for him. However, while Fox has backtracked, Trump has not. His reckless accusation still remains on his Twitter feed unaltered or updated.

Trump is hopelessly addicted to the “Curvy Couch” potatoes of Fox and Friends. He watches them obsessively and frequently tweets what they say in real time. Yesterday he posted four segments from the program on Twitter, Today he added three more. And yet, when it is abundantly clear that the information is wrong, he stands by it with unwavering faith. Even when they admit they are wrong. That says a lot about our thin-skinned, ego-driven, bull-headed president, doesn’t it?

4 thoughts on “Fox News Issues Rare Story Correction – Trump, Who Retweeted It, Does Not”