This week has served up some of the most damning evidence of presidential malfeasance since Donald Trump was elected. He just returned from a catastrophically embarrassing European junket where he was politically and personally isolated. Then his ethically-challenged son confessed to various election-related crimes, including collusion with Russia. Reports from inside the White House paint a picture of panic and bitter internal acrimony. 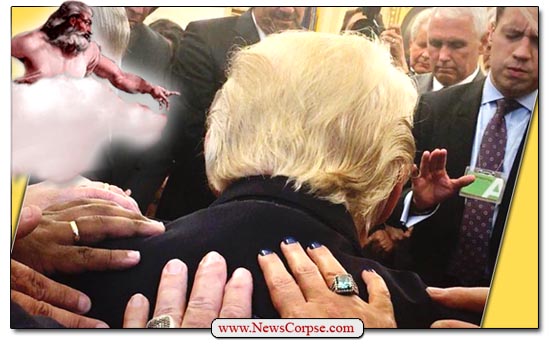 How bad is it? On Monday Trump summoned a passel of Christian pastors to the Oval Office to engage in an emergency exorcism. Or maybe it was just a prayer session. Who can tell them apart? As CNN reported it:

“President Donald Trump, who has remained out of public view since returning from Europe late Saturday, welcomed evangelical leaders into the Oval Office on Monday for a prayer session. Photos posted by some of the invitees show the group surrounding Trump and laying their hands on his shoulders as his head is bent in prayer.”

CNN quoted Liberty University’s Pastor Johnnie Moore saying “We similarly prayed for President Obama but it’s different with President Trump.” Presumably the distinction is that they were praying for the welfare of Trump, but for the condemnation of Obama. In fact, in 2010 Moore was part of a radical Christianist plot to remove Obama from office.

In addition to this ritual invocation, right-wing Christo-pundit Pat Robertson just announced a big media get. He interviewed Trump today at the White House for the 700 Club on his Christian Broadcasting Network. It’s one of the only interviews Trump has given in months that wasn’t on Fox News. The interview will air on Thursday, but the tone was already set in the announcement posting:

“President Trump differentiated his administration from Putin’s, saying he’s working for America’s best interests while Putin is fighting for Russia. And Trump thinks Putin would probably have been happier with Hillary Clinton in the White House because he’s building the U.S. military and working to export U.S. energy, which Russia opposes.”

Robertson didn’t mention anything about the recent confession that Don Trump, Jr. had a secret meeting with Russian operatives. Consequently, he didn’t address the admission that Russia was seeking to help Trump by delivering dirt on Clinton. That directly contradicts Trump’s baseless assertion that Vladimir Putin preferred Clinton.

It’s not especially surprising that this overtly religious grandstanding is occurring at the most precarious position for Trump to date. And no one should be foolish enough to think it’s because of Trump’s devout faith in God to deliver him from evil. This is a desperate and transparent outreach to the segment of the electorate that is most devoted to him. He is shoring up his cult-like base in advance of tribulations to come. But he’s making a big mistake if he thinks that God, or his self-appointed Earthly shills, can deliver him the salvation he seeks. His sins are against the laws of Man/Woman and the Constitution, not God. And his judges will be his fellow citizens.

5 thoughts on “How Desperate is Donald Trump Right Now? He’s Turning to ‘God’ for Help”