Last week may have been the worst one so far for Donald Trump’s floundering presidency. His new communications director, Anthony Scaramucci, unleashed a profane rant against his White House colleagues. His Chief of Staff, Reince Priebus, got the boot. The attempt to kill healthcare went down in flames as a Republican controlled Senate couldn’t pass three different versions. He misfired with an illegal proposal to discriminate against transgender soldiers. And the Boy Scouts felt compelled to issue a public apology after Trump’s politicized rant at their Jamboree. These failures cap a six month span of domestic dysfunction and international embarrassment. 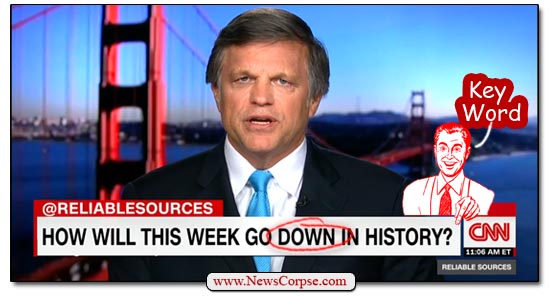 [LATE BREAKING:] Scaramucci has been fired. Sources say that the new White House Chief of Staff, John Kelly, wanted to select his own team. Translation: Get that vulgar piece af crap out of my White House.

Not surprisingly, Trump is living in a bubble of narcissistic grandiosity. He is convinced that everything is going tremendously and that he is the bestest president ever. He tweeted Monday morning:

Of course, the performance of the stock market, the economy, and employment, has to be credited to the Obama administration. All of those metrics were ascending throughout his term and were the result of his policies. There has not been a single Trump initiative implemented that would impact any of them. Nothing on taxes, trade, jobs, and no budget has been passed in Congress. Trump is running on Obama’s fumes.

What’s more, if wages are “raising” (sic), it’s only because Democrats increased the minimum wage despite the opposition of Republicans. And if the border is secure, then we don’t need that damn wall anymore, right? As for the Supreme Court, the Senate couldn’t get Justice Gorsuch through without blowing up the rules to allow a 51-vote confirmation. Considering all of the above, Trump’s assertion that there is “No WH chaos” is absurd in the extreme.

Sunday on CNN’s Reliable Sources, presidential historian Douglas Brinkley was asked about the state of the Trump administration. Host Brian Stelter noted that observers from across the political spectrum were stunned. They’ve been using words like “crisis” and “chaos” to describe the current White House. Brinkley responded with his view that “It’s in utter disarray,” and that “Donald Trump [is] unfit for command.” Then he spelled out in detail where it has all gone so horribly wrong (video below):

“I think when you have a White House communications director that uses the kind of foul language that he does against fellow employees of the federal government, and makes threats the way that he did, and that’s supposed to be your solution to the United States’ way they are going to communicate to the world? It means Donald Trump picked the wrong person to be his communications director.

“He has a White House that’s leaking like crazy. As just mentioned, there are people ready to whistle-blow. He thinks that you can govern by chaos and it’s not working. It is true he has that 36 percent of the American public backing him, but that means over 60 percent of Americans think that he is doing a miserable job. And the rest of the world is laughing.

“We have a crisis in North Korea and we’re playing these reality TV, big time wrestling games because Donald Trump was weaned and raised on television. And it’s become like a TV episodic president where every day you’ve got to say something sensational to make sure that your name is in the headlines.

“We had a problem with Nixon. If there is any president this is like, it’s Nixon. You listen to the Nixon Watergate tapes – the secret tapes – and you hear Nixon ramble and it sounds like Donald Trump’s tweets. And it didn’t turn out well for Nixon.”

It’s hard to add anything that. Except for what Brinkley himself added:

“The key to Donald Trump is just this kind of blind fierce loyalty, and that’s what Franco expected in Spain. It’s what Mussolini wanted in Italy. These are kind of ways in which you’re asking people to march in lock-step with you.”

In other words, Donald Trump is a wannabe dictator. He has demonstrated that he has never had the intelligence, experience, or character to be a legitimate president. He is a joke who parlayed his role as a TV game show host to the White House on the strength of his celebrity and ability to lie. But now the consequences of making such an incompetent, unethical fraud the head of state are becoming painfully clear. Hopefully he won’t be in charge of anything for much longer.

Historian Douglas Brinkley: "Trump thinks you can govern by chaos — and it's not working." https://t.co/9HvyJxk7I4

One thought on “Unfit for Command: Presidential Historian’s Horrifying Warning About Donald Trump”