There’s an old saying that offers this common sense advice: If you find yourself in a hole, stop digging. Apparently Donald Trump hasn’t heard that saying. Or maybe he just doesn’t think it applies to people who are perfect and rich and certain of their superiority. Consequently, he continues to dig himself deeper into the cesspool of white supremacy advocacy. 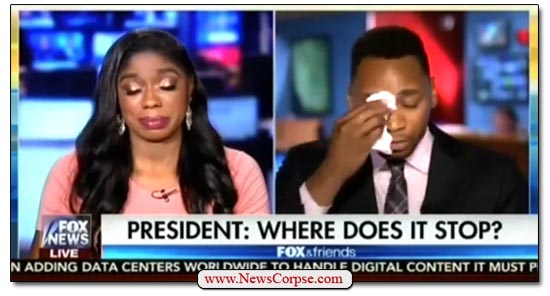 On Tuesday Trump held an impromptu press conference that quickly devolved into a nauseating defense of neo-Nazis and the racism embodied by the KKK and other hate groups. He was roundly chastised by Americans from across the political spectrum. Democrats and Republicans alike are distancing themselves from his overt bigotry. A new poll shows that more people believe that Trump supports white nationalism than think that he opposes it. The fallout from his disastrous performance was nearly universal.

One area of respite for the President was, of course Fox News. With virtually every program they aired came a vigorous defense of Trump’s allegedly unyielding love for all mankind. Sean Hannity and Tucker Carlson led the way in white-washing his rancid prejudices. At the same time they sought to smear those who oppose the racism espoused by Trump and company. But there were a few moments when real emotions were displayed that better represented the nation’s revulsion of Trump’s bigotry.

On Fox and Friends, co-host Abby Huntsman interviewed Johns Hopkins professor Wendy Osefo and Republican political analyst Gianno Caldwell. Her mission was clearly to guide the discussion into a redemption from Trump’s latest debacle. Prof. Osefo provided an excellent definition of the terms of the debate (video below):

“This is about hatred. It’s about white supremacy. And to have Heather Heyer killed on U.S. soil by a Nazi, Deandre Harris beaten and bludgeoned by Nazis. This is not talking points here. This isn’t partisan. This is human life. And as a mother, to hear the President of these United States not sit here and condemn what has happened. As a black woman of two black boys, my heart bleeds. This is not talking points here. This is personal. And we as a nation, as a country, have to do better.”

Huntsman’s reaction completely ignored this heartfelt plea for Trump to change course. She made a pathetic attempt to steer the conversation back to territory that was advantageous to Trump:

Gianno, to you. Do you agree with that? There are good people on both sides of this debate. We talk about keeping these statues up. People that I talk to say that this is about history. How do we move forward. How do we learn from those mistakes if we just tear everything down?

Huntsman’s pivot included the White House talking points that both sides are to blame and that there are good Nazis. She also revealed the narrow scope of people that she talks to. This isn’t about preserving history, which is well documented in libraries full of historical literature. The people Huntsman talks to actually want to preserve the honoring of traitors. But her other guest wasn’t distracted by this tactic:

“You know, I come today with a very heavy heart. Last night I couldn’t sleep at all because President Trump, our president, has literally betrayed the conscience of our country. The very moral fabric on which we’ve made progress on race relations. He’s failed us. And it’s very unfortunate that our president would say things like he did in that press conference when he said that “There’s good people on the side of the Nazis. They weren’t all Nazis. They weren’t all white supremacists.” Mr. President, good people don’t pal around with Nazis and white supremacists.”

Remember, Caldwell is the Republican on the panel. And he expressed what every decent Republican ought to admit. Republicans in Congress need to renounce Trump’s bigotry and defense of the alt-right white supremacists. His cabinet must demand he reject racism and fire those on his staff who embrace it (Bannon, Gorka, Miller, etc.). Absent that, they must resign themselves.

Caldwell concluded his remarks with a shot aimed directly at Huntsman and Fox News:

“For anyone to come on any network and defend what President Trump did and said at that press conference yesterday is completely lost and potentially morally bankrupt.”

That’s something that all politicians, pundits and journalists need to take seriously. This isn’t about talking points. It’s about human decency. And there aren’t two sides to that.