It’s been three days since the white supremacist rally in Charlottesville. The deliberately hostile affair claimed the life of Heather Heyer, a counter-protester, and injured dozens more. Donald Trump distinguished himself as a Nazi-sympathizer by refusing to condemn the hate groups that organized the event in his first public comments. It took him two more days to say anything remotely critical of the perpetrators of the violence. 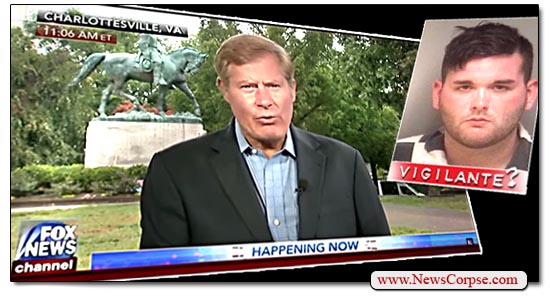 In the meantime, Fox News went to work covering for the callousness of the President. They made excuses that stretched the limits of credulity. Fox and Friends worked overtime to portray Trump as calm and restrained during his first non-comment, and bold and decisive after the second. Trump-fluffers Sean Hannity and Tucker Carlson labored to turn him into a statesman who embodied harmony and fellowship.

For his part, Trump maintained his well-known posture of arrogance and bigotry. He posted tweets blaming the media for the public’s repudiation of his insensitivity. He also retweeted a comment by a known alt-right conspiracy monger that sought to shift the debate to evil black folks. And to top it off, he retweeted another Fox and Friends story (the 18th time this month). This one was about his consideration of a pardon for the racist former Arizona sheriff, Joe Arpaio.

It’s no secret that Fox and Friends, Hannity, et al, are opinion-based programs masquerading as news. But Fox’s Washington D.C. correspondent, Doug McKelway, seeks to present himself as an actual journalist. Which makes his report on Tuesday all the more troubling (video below). The segment began as a story about activists taking down statues that honored confederate traitors. But it quickly derailed into propaganda of the worst sort. McKelway’s commentary completely twisted the narrative into right-wing bullshit juxtaposing…

“…those who find the system of slavery to be so abhorrent that we should have no memories of it whatsoever to those who believe that what their great-great-great-great granddaddy did in the Civil War should be remembered and preserved.”

Is McKelway arguing that slavery was not really that abhorrent after all? Also, he apparently thinks that commemorative statues are the only way to record history. Maybe he should read a book. No one is suggesting that the memory of slavery be wiped out. Just that the memory be held in the context of its inhumanity, rather than being honored in bronze. And if anyone wants to preserve what their confederate forefathers did, let it be preserved as the treason and brutality it actually was.

But McKelway wasn’t through. It wasn’t enough that he wanted to remember the civil war slave states fondly, he implied that any other recollection was a communist plot:

“And then, this ventures into the area of airbrushing of history. A tactic of totalitarian governments, a common practice in the former Soviet Union where people who fell into disfavor in the government were literally airbrushed out of history.”

Again, no one is airbrushing anyone out of history. Patriotic Americans very much want to maintain the historical record of the civil war. Including the parts that document the barbarous agenda of the South. But to smear those who advocate an accurate retelling of history as totalitarians and commies is just plain nauseating. In fact, it is a tactic of totalitarians and commies. McKelway believes that slave owners have simply been unfortunate to have fallen out of favor. Poor babies.

And if you thought that was the end of McKelway’s atrocities, you’re not giving him and Fox News the credit they deserve. He closed the segment with a note regarding the funeral service for Heather Heyer. But in doing so he elevated her murderer to a status that is utterly offensive:

“We’ve also learned when the funeral service will be held for Heather Heyer, the young woman, the 32 year old that was killed by the white vigilante who mowed down people in downtown Charlottesville on Saturday.”

Vigilante? For the record, a vigilante is someone who has decided to take the law into his own hands. It is itself against the law. It is generally undertaken when the perpetrator believes that legal authorities are deemed inadequate or unresponsive. And the victim is someone who is thought to be guilty of a crime, at least in the eyes of the vigilante. It’s wrong and indefensible in civil society, and often leads to innocents being targeted and harmed. But some crackpots believe that it’s justifiable and romantic.

That said, what crime does McKelway think that Ms. Heyer committed that would make her fair game for a vigilante? The driver of the car that killed her, James Alex Fields, had only one motive: To do harm to innocent people who opposed his racist ideology. That is not a vigilante. It’s a cold-blooded murderer and a radical right-wing terrorist. McKelway really needs to adjust his definitions, as well as his heinous biases as a person and a so-called reporter.