In the past couple of weeks, Sen. Bernie Sanders has been aggressively advocating for his proposal to make Medicare available to all Americans. The response from his senate colleagues has been exceedingly positive. He already has about sixteen co-sponsers. When he introduced a similar bill in 2013, he had none. 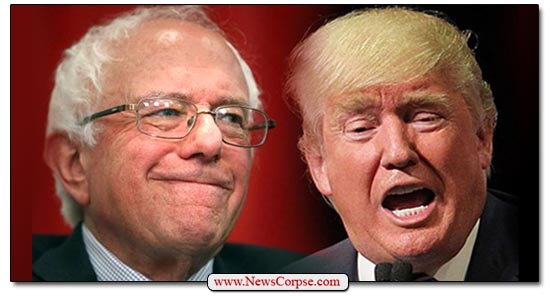 Not surprisingly, Donald Trump is in panic mode castigating Sanders and his plan to insure everybody. Trump unleashed his typical fury on Twitter saying:

…I told Republicans to approve healthcare fast or this would happen. But don't worry, I will veto because I love our country & its people.

So now Trump is resorting to ultra-hyperbolic language to demonize single-payer healthcare as a “curse.” And the absurdity of telling people not to worry because he will veto it is downright laughable. He obviously doesn’t know what the American people are worried about.

Most polls show that a single-payer plan is broadly favored by a significant majority of voters. The Economist conducted a poll in April that showed sixty percent supporting Medicare-for-All. That included seventy-five percent of Democrats, fifty-eight percent of Independents, and even forty-six percent of Republicans. The poll also broke down the responses by candidate preference, showing support from eighty percent of Hillary Clinton’s voters and forty percent of Trump’s.

Clearly, the American people do not regard Medicare-for-All as a curse. Nor would vetoing the bill ease their worries. And given the level of support, Trump can hardly claim that such a veto would demonstrate that he loves the country and its people. Quite the opposite, as a matter of fact.

Bernie Sanders took note of Trump’s tweet and had something to say about it as well. He replied with a couple of tweets of his own that put Trump in his place.

What is a curse is your support for throwing 23 million off health insurance. That's the curse and we won't allow you to get away with it.

Good points. It seems rather surreal to characterize providing health care to everyone as a curse. Particularly since the United States is the only major industrialized country that doesn’t have a national health plan. As a result, we are paying many times more for care and getting less for it.

What’s more, throwing twenty-three million people off of their health plans is an odd way to express your love. Americans are well aware of this. That’s why only seventeen percent supported the Republican bills which deservedly went down to defeat.

The people are more tuned into this matter than at any time in the past. If Trump and his GOP cohorts think they can fool the people into accepting their deceptive plots to kill ObamaCare, or oppose Medicare-for-All, they are sadly mistaken. And we won’t have to worry about a presidential veto if Trump isn’t president. So there’s that.

One thought on “Trump Threatens to Veto Medicare-For-All, But Gets a Brutal Slapback From Bernie Sanders”