The embarrassing spectacle of Donald Trump’s feud with popular sports figures continues to heat up. It began several days ago with Trump lashing out at NFL quarterback Colin Kaepernick and NBA star Steph Curry. These and other public figures have been actively expressing themselves regarding civil rights and racism in America. And what they get for exercising their First Amendment rights is ignorant insults from the White House. 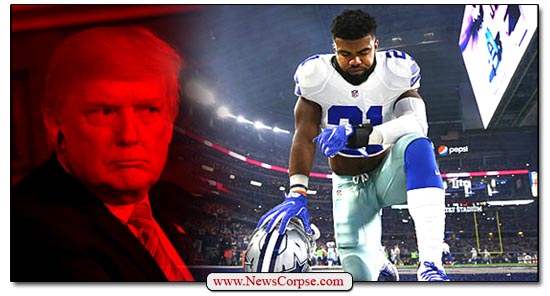 In response to Trump’s Twitter tantrums, many more players are speaking out. What’s more, they have been joined by their coaches and team owners. Among those castigating Trump are friends and political supporters like former Buffalo Bills coach Rex Ryan, who is “pissed off.” Patriots owner, and Trump donor, Robert Kraft, said he is “disappointed” with Trump. On Sunday morning players for the Jaguars and the Ravens took a knee, joined by coaches and owners. The entire Steelers team will not take the field for the national anthem.

Trump’s ill-advised tirade is producing a backlash that any sensible person could have predicted. He has inspired more people to protest than ever would have had he kept his mouth shut. And the criticism directed at him points out the obvious racist overtones in his outburst. For instance, many observers have noticed that Trump called protesting athletes “sons of bitches,” but praised white supremacists in Charlottesville as “very fine people.” It’s apparent that the President has a case of tunnel blindness that prohibits him from seeing reality. And that may explain his latest tweets on Sunday morning:

If NFL fans refuse to go to games until players stop disrespecting our Flag & Country, you will see change take place fast. Fire or suspend!

First of all, it is unprecedented that a president of the United States would call for a boycott against American enterprises on purely political grounds. He is advocating financial harm and the loss of jobs for businesses and citizens who have done nothing more than employ free speech to lawfully and peacefully express their opinions. Furthermore, he is calling for Americans to be fired for constitutionally protected activities. Clearly Trump has no understanding of American values as he demonstrates his overtly anti-American position. But he wasn’t finished with this juvenile tantrum:

…NFL attendance and ratings are WAY DOWN. Boring games yes, but many stay away because they love our country. League should back U.S.

Trump totally skids off the rails with this criticism of the NFL’s ratings. He recently misrepresented the TV ratings as being “massively” lower. That’s a lie. They are modestly lower. And the reasons have more to do with the evolving state of television than with player protests. But what makes this criticism so absurd is that Trump’s own ratings have broken records for descending into an abyss. No president has ever had lower approval ratings at this point in his presidency. And he is bringing the whole Republican Party down with him.

By his own standard, therefore, Trump is “disrespecting our flag and country.” The American people “stay away [from him] because they love our country. They should boycott this presidency, and he should be fired. It’s fair to say that given the choice, voters would choose to keep the NFL over this failure of a president. And his most recent abhorrent behavior only solidifies the distaste and distrust they have for him. If there’s one thing that Trump has succeeded in, it’s getting people to join together in their hatred for him.