For much of the past week Donald Trump has been tweeting in a frenzy over subjects not previously in the news. He has escalated the debate over professional athletes expressing themselves on matters of significant social importance. And he has also created a crisis situation with North Korea that wasn’t an issue until he starting mouthing off. 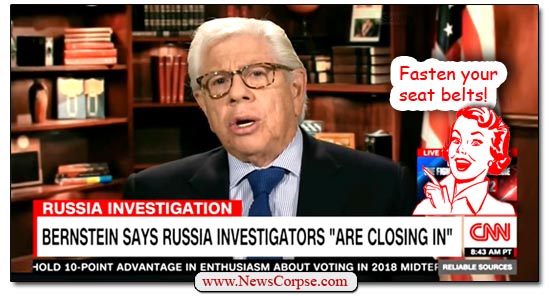 Both of those issues are newsworthy on their own now. Certainly the message behind the movement that quarterback Colin Kaepernick started needs to be addressed. Systemic racism in America continues to cause real harm. And Trump’s overtly bigoted contribution has had the unintended effect of getting the issue more positive attention. As for North Korea, Trump’s childish feuding with Kim Jung Un has thrust the world into a rhetorical firestorm. And this one has frightening, nuclear overtones. The media can hardly ignore that.

And that may be the point. Trump is trying to control the news cycle to keep it clear of something that he’s truly afraid of. By injecting new and melodramatic subjects into the media, he hopes to prevent further revelations about his own scandals. To some degree it’s working. But in a segment on CNN’s Reliable Sources host Brian Stelter and famed Watergate journalist Carl Bernstein were not fooled. (Video below):

Stelter: It was reported this week that special counsel Robert Mueller is asking the White House to provide documents related to Trump’s actions as president. Not just pre-campaign or pre-election day, but issues recently. That request includes at least thirteen areas in which investigators are seeking information. Including statements made about former FBI Director James Comey made in the presence of Russian officials. Also the firing of Michael Flynn. And the meeting at Trump Tower with Donald Trump, Jr. As you recall, he sought to get damaging information about Hillary Clinton from a Russian individual.

That introduction covered a broad swath of the potential criminal behaviors emanating from the White House. And Carl Bernstein’s response closed the circle with a concise summary of the President’s unsavory avtivities:

Bernstein: Robert Mueller, the special counsel, is looking at the conduct of President Donald Trump and members of his family, especially Jared Kushner. Also his closest campaign aides in terms of their dealings with Russia, ethno-Russians, during the campaign and before. And in business. But there’s a much larger context that now informs the whole investigation. And that is the conclusion of the American intelligence community – under Donald Trump, not under Obama – that now is certain that the Russians were very, very, effective at undermining the campaign of Hillary Clinton and specifically helping Donald Trump.

And we keep hearing the word collusion, which is not a legal term. What Mueller is focused on is quite different than the simple idea of collusion. It’s whether or not Donald Trump, and perhaps his family and business associates, knew that the Russians were trying to help his campaign. And if they knew that, why didn’t they blow the whistle on the Russians? Did they try to cover it up? Are they continuing to try and cover up that knowledge? That’s the real question. Not the word “collusion,” which Trump and the White House keep trying to focus on.

Finally, Bernstein proposed what might be the motivations driving Trump and his more recent scandal mongering:

Bernstein: But the reason is these investigations are closing in on him, his family, and his aides. And if indeed there’s nothing there and it’s a hoax, then why has Donald Trump tried to undermine, demean and obstruct – not necessarily in terms of the legal obstruction of justice – these investigations for six months at every turn? He’s done everything that he can, as have those around him, to keep these investigations from succeeding.

That pretty much says it all. Trump is engaging in a fierce effort to divert attention from himself and his possible prosecution and/or impeachment. And he’s using other news events, some serious, some fabricated, to achieve that goal. Hopefully more journalists like Bernstein and Stelter will demonstrate that they cannot be tricked into serving as his propaganda merchants.