The news yesterday of the massacre in Las Vegas was both horrific and predictable. It is unbearably sad that Americans are still being slaughtered by madmen with weapons that should only be available to soldiers at war. And yet, too many of our national leaders continue to resist common sense methods to keep such deadly artillery off the streets. So once again we are mourning the dead and sending out thoughts and prayers to their loved ones. 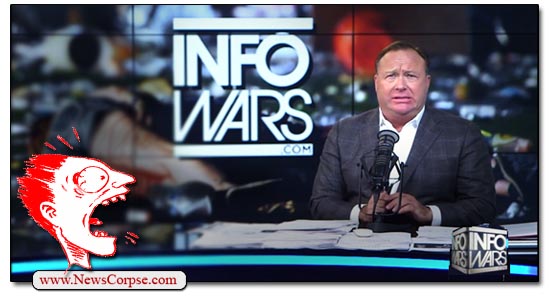 Just as predictable is the fantastical fiction of conspiracy theorists and others seeking to exploit tragedy. Chief among them is Alex Jones, a devoted supporter of Donald Trump whom, he claims, he’s in frequent contact with. Trump has has appeared on Jones’ Infowars program praising his “amazing” reputation. And an Infowars “correspondent” was actually granted a White House press pass.

Consequently, you have to wonder whether the President thinks the latest hallucinatory ramblings of Jones are also amazing. Within hours of the Las Vegas shooting, Jones was disgorging his deranged analysis. It consisted entirely of invented “facts” and lunatic outbursts. The wild ride begins here (video below):

“Now here’s the big news. Islamic State has taken responsibility, and the man known by the police for issues, I guess for mental illness, reportedly converted to Islam in the last two months. And even though that’s being reported by Reuters and others, you’re not seeing on it on CNN or MSNBC.”

Perhaps the reason other news outlets are reluctant to report it is because there’e no proof that it’s true. The report by the Associated Press includes the disclaimer that ISIS “has a history of exaggerated or false claims.” Even so, Jones’s media bashing was wrong. A tweet by CNN’s Brian Stelter explained that CNN and others ought not to cover the claim by ISIS because there isn’t “a shred of evidence” to support it. And NBC’s Pete Williams did discuss the claim on MSNBC, also noting that it wasn’t believable.

Jones then preposterously asserted that Al Gore was allied with ISIS and Al Qaeda. He connected that to a thoroughly made up claim that two months ago Gore and former CIA Director John Brennan had predicted a terrorist attack and the overthrow of Donald Trump within two months (i.e. now). Jones said that this was because October 1st was the 100 year anniversary of the Bolshevik Revolution. As nutty as that conspiracy theory is, it was also historically wrong. The Russian uprising against the tsarist regime actually began in February of 1917 and concluded in late October with the Bolsheviks assuming control of Parliament. There was no significant event on the first of October that would have warranted an anniversary remembrance. But then Jones really flew off the rails:

“Here’s the other big news. On Saturday night, Sunday morning, they released O.J. [Simpson] just twenty hours before the attack took place. So all the media would come and be in place to cover this event. The whole thing has the hallmarks of being scripted by ‘deep state’ Democrats and their Islamic allies using mental patient cutouts.”

Really? Simpson was released in the dead of night specifically to avoid any media coverage. And it worked. There was a single fixed camera at the prison that caught Simpson’s release. Jones also alleged that Democrats and communists were planning to “go violent and start shooting and killing police, conservatives, whites, you name it. And that white genocide needs to be carried out.” According to Jones, this was reported by national news organizations. It wasn’t. And even Saturday Night Live was accused of being a part of the plot to “cause a civil war in this country.” And before he was done, Jones regurgitated the debunked story that Democrats or unions refused to deliver emergency supplies to the victims of Hurricane Maria in Puerto Rico.

This is the level of depravity that Alex Jones sinks to on a regular basis. He previously said that 9//11 was an inside job. He charged that the mass murder of the children at Sandy Hook was a hoax staged by actors. And he still doesn’t believe that Barack Obama is a U.S. citizen. Nevertheless, he has the respect of Donald Trump who promised that “I will not let you down.” And given the quantity and quality of his lies, Trump is surely keeping that promise.