The big economic news on Friday was that 33,000 jobs were lost in September. It was the first time in seven years that the jobs numbers went negative. Most reports were quick to cite the rash of hurricanes that plagued the nation in recent weeks. However, the job growth statistics throughout 2017 have lagged behind the same time period in 2016. 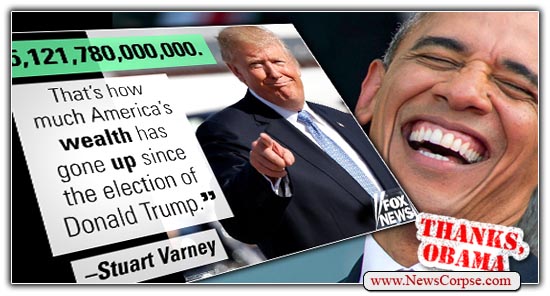 It’s no coincidence that Donald Trump and Fox News have been bragging about the performance of the stock market. It’s an easy, albeit deceitful, distraction from the other bad news of the day. Never mind that stocks are currently in the second longest bull market in history and that it started in 2009 under President Obama. Trump has done literally nothing that would change the momentum of Obama’s economy. Not a single economic bill has reached his desk for signature. But that hasn’t stopped him and his propaganda division at Fox News from trying to steal the credit, as demonstrated in these tweets:

On @foxandfriends, @Varneyco revealed how much the nation's wealth has increased since November 8, 2016. pic.twitter.com/YNvN7CK683

The wealth increase that Fox News is touting is based solely on the rise of equities. Not only is it false to describe that as “the nation’s wealth,” it is a fluid indicator that could reverse course tomorrow. Indeed, many stock analysts regard the market’s current position as overvalued. These analysts are predicting a “correction” that could send the markets down ten or twenty percent. What’s more, the soaring stock market does not reflect the economic realities of most Americans. Other economic indicators (i.e. wages) are showing only small advances. The beneficiaries of stock gains are predominantly the usual suspects of the GOP (Greedy One Percent).

Some of these discrepancies were observed by the Twitter community, who proceeded to bludgeon Fox for their bullshit. A few of the notable comments follow:

That victory goes to @BarackObama Since no new economic changes have occurred with this administration. Thanks Obama

Well shit where is my cut?

You already prostituted that in an earlier tweet. How about them job numbers today?

No need for a tax break for the wealthy, clearly have the money to pay taxes at current rate! Bigger tax break to ENTIRE middle class! @GOP

When Obama was saving the US economy & the stock market & job growth were doing records why didn't u report it like u do now?

Another propaganda tweet from the state news agency. All smoke and mirrors to make Trump look like he knows what he’s doing.

Tillerson was right you are a moron

None of this was #DonaldTrump's doing. So he deserves no credit. And who will he blame if the market falls? Surely not himself. pic.twitter.com/HuBcqgTE7y

It’s always dangerous to rely on stock market performance to validate the economy. There are too many factors that can shift investor sentiment. And with Trump’s saber-rattling over nukes with both North Korea and Iran he’s playing with fire, literally. And if that doesn’t sink the markets, then his proposed tax plan, which will benefit only the rich and blow up the deficit, will do the job.