The current regrettable President of the United States has repeatedly shown that he spends more time watching Fox News than presidenting. Coming in second is golf. Third is tweeting about Hillary Clinton and the election a year ago. In fact, being president probably isn’t in the top ten. It has been proven that Donald Trump is faithfully glued to his TV, especially in the morning, and reacts in real time with idiotic tweets. 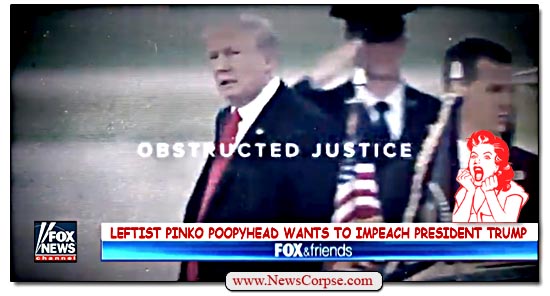 That pattern was in evidence Friday morning after an unusual advertisement aired during Trump’s favorite TV show, Fox and Friends. Tom Steyer is a billionaire who has been active in the environmental movement and liberal politics in general. He recently started a campaign to get Congress on the record with regard to Trump’s mental unfitness to serve. He launched the “Need To Impeach” website to inform and gather support. It includes a video that describes Trump as “a clear and present danger who’s mentally unstable and armed with nuclear weapons.” The video begins with a chilling list of particulars:

“He’s brought us to the brink of nuclear war, obstructed justice at the FBI, and in direct violation of the Constitution, has taken money from foreign governments and threatened to shut down news organizations that report the truth. If that isn’t a case for impeaching and removing a dangerous president, then what has out government become?”

Trump threatens our Constitution, our freedoms, and our lives. It’s time to begin impeachment proceedings. Join us. https://t.co/L5Azj0p6oA pic.twitter.com/rqQkt2aMn8

Steyer’s campaign began a week ago with a $10 million budget. It has gotten attention from a variety of media, with the unsurprising exception of Fox News. Trump himself has completely ignored this, despite it being precisely the sort of thing that stirs his giblets. Any attack is usually met with a juvenile retort on Twitter. But the bully-in-chief has been uncharacteristically mum on this assault from an elite lefty. Until now.

Friday morning Steyer’s video ran as an ad during Fox and Friends. Steyer was likely not under the impression that this ad would change the so-called minds of many Fox viewers. But there was one viewer whose attention it would surely grab. The President, of course, was up watching the show and saw the ad. We know that he doesn’t watch much of anything else, and his handlers keep him in the dark as much as possible. Consequently, this is likely the first he heard of it. And it didn’t please him. Shortly after the ad aired, Trump was tweeting about it:

Wacky & totally unhinged Tom Steyer, who has been fighting me and my Make America Great Again agenda from beginning, never wins elections!

You’ll notice that Trump’s response consisted of two primary points. First of all, he had to unleash a typically childish insult on “whacky” Tom Steyer. Secondly, he focused on horse-race politics rather than anything of substance. What Trump did not include in his response was any refutation of the facts that Steyer laid out.

However, what’s most notable about this is that Steyer has demonstrated the best way to get under Trump’s thin and wrinkled skin. The President is notoriously sheltered in his wannabe dictator bubble and has little access to unfiltered criticism. His caretakers meticulously strip any bad news from the briefings they permit him to receive. But if it’s run on Fox and Friends he’s gonna see it and react. Therefore, that should become the preferred method of reaching Trump for critics, Democrats in Congress, and the media. So the next time Rachel Maddow has a question for Trump, she should just put it on video and buy a spot on Fox News.