Thousands of miles from America Donald Trump is shooting off his ignorant mouth and putting the country and the world in peril. This could not be a clearer case of treason against the United States. And the fact that it is committed by someone with the title of president makes it all the more disturbing and dangerous. 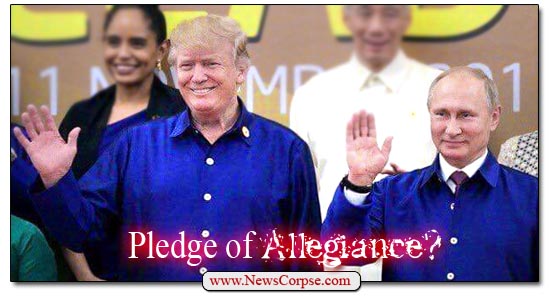 While in Vietnam, a country Trump avoiding visiting as a young man by seeking five draft deferments, the President was asked about the well documented attack on American democracy by Vladimir Putin’s Russia. His responses are bone-chilling and demonstrate just how far he has deviated from his patriotic duty and common sense. Here are some choice excerpts from his remarks:

It’s hard to find the words to react to this frighteningly stupid and treacherous rhetoric. Luckily, the above linked article from Politico supplied a quote from an expert that sums it up perfectly:

“The worst part of this is not that Trump takes Putin’s word over the evidence based analysis of his own intelligence agencies. It is not even that he plays the role of a useful idiot as he kowtows to Putin yet again. The worst part, by far, is that a hostile power is engaged in an ongoing attack on America’s political system and Trump is deliberately stripping the nation’s defenses bare and leaving us exposed to future assaults. It is unilateral disarmament plain and simple,” said Thomas Wright, Director of the Center on the United States and Europe at the Brookings Institution and an expert in national security. “We have never seen this type of weakness in a U.S. president before.”

Sadly, we have never seen this type of weakness, idiocy, narcissism, corruption, blindness, cowardice, treasonous, childishness, vengefulness, greed, and hatred, in a U.S. president before. Hopefully we will not see it for very much longer. He needs to be driven from office by either law or shame. And our Congress must finally take a stand for what’s right and fulfill the oath they took to defend the Constitution.

5 thoughts on “In His Own Words: Trump is a Traitor Who Believes Putin Over His Own Intelligence Agencies”