When Donald Trump returns from his “Humiliate America Tour” of Asia he will be greeted by politics and scandals that he cannot continue to avoid. His embrace of Vladimir Putin, the ongoing investigation into his collusion with Russia, indictments of his campaign and administration staffers, sexual abuse by GOP senate candidate Roy Moore, and the already floundering Republican attempt at tax reform. 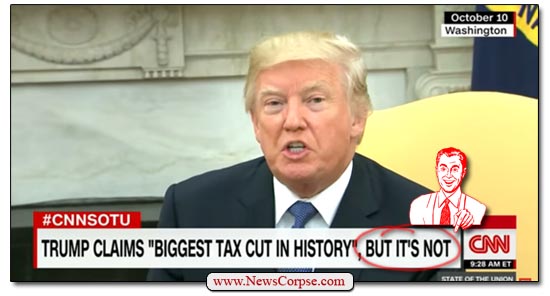 Trump has dived hair first into the tax debate with his customary aversion to the truth. On multiple occasions he has referred to the still stewing tax legislation as the “biggest tax cut in history.” It isn’t. But that didn’t stop his Treasury Secretary (aka the Foreclosure King), Steve Mnuchin, from lying to CNN’s Jake Tapper on behalf of his pathological boss (video below). In this exchange Mnuchin attempts a shady two-step to relocate the goalposts to another county. Tapper addresses the falsehood that Trump is proposing the biggest tax cut in history:

Tapper: We’ve tried to find a way that this is true, but it’s not.
Mnuchin: This will be the largest change since President Reagan.

A large change since Reagan is not the same thing as the biggest cut ever. Tapper displayed several different ways to calculate the tax impact of the Trump bill, but none of them achieved the ludicrous claims of Mnuchin and the President. So Mnuchin reloads and aims to move the goal posts even further by pointing out that just the corporate tax rate would drop from thirty-five percent to twenty. That, of course, has no impact on the tax bills of average Americans. And it still doesn’t support Trump’s gross exaggerations.

Undeterred, Mnuchin followed that up with perhaps the worst defense of fiscal policy imaginable. He bragged that the pass-through tax rate (which mainly benefits large corporations) “is gonna be the lowest rate since the 1930’s.” So Mnuchin is expressing outright pride that his plan matches the one in effect during the Great Depression. Really?

The big lie that Mnuchin, Trump, et al, relentlessly propagate is that our current tax system makes the U.S. uncompetitive. And they say this at the same time that they brag about how great the American economy is doing. Trump praises himself regularly for the historic performance of the stock market (although he has nothing to do with that). But if that’s true, why would we need to give more tax breaks to the very people and businesses who are already disproportionately prospering? Especially at a time when there are so many other critical demands for resources, including natural disaster relief, healthcare, infrastructure, and deficit reduction.

The goal of the Republican Party has always been to restore the economic principles that benefit their primary constituency and donors – corporations. These are the same principles that brought about the Great Recession of 2008, and most other financial disasters. And that includes the Great Depression. However, we do not often hear them so openly admit that this is their objective. It’s bad enough that these robber barons are constantly trying to steal from the American people to enrich themselves. But when they are so comfortable that they feel no need to disguise what they’re doing, it’s a sure sign of trouble ahead.